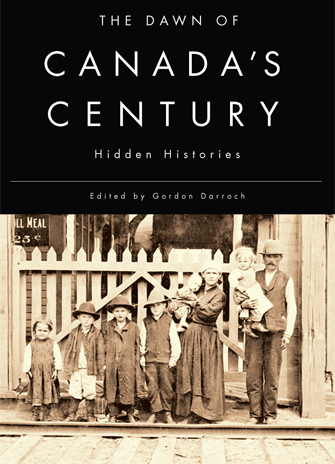 Sir Wilfrid Laurier famously claimed that the 20th century would be Canada’s century and, indeed, its opening decade witnessed remarkable territorial, demographic and social transformations. Yet the lives of those who lived and laboured to fashion these changes remain largely hidden from historical view, says York University sociology Professor Emeritus Gordon Darroch, editor of the new book The Dawn of Canada’s Century: Hidden Histories.

The book presents close and systematic interpretations of everyday lives centred on the first national sample of the 1911 census, earlier census “microdata” samples and other historical documents.

The Dawn of Canada’s Century will launch Tuesday, April 22, from 5 to 7pm, at Grano’s Restaurant, private room, 2035 Yonge St. (three and a half blocks north of the Davisville subway station) in Toronto. Darroch and Chad Gaffield, president of the Social Sciences & Humanities Research Council of Canada, will speak at the launch. Everyone is welcome to attend.

“The varieties of social histories are now myriad, though all are grounded on some form of  collective biography constructed from one, a few or many sources that describe aspects of the lives of historical individuals,” says Darroch. The Dawn of Canada’s Century (McGill-Queen’s University Press) is a multi-authored book that contributes to a rapidly expanding international scholarly endeavour based on such systematic historical evidence. It situates early 20th-century Canada within international historical studies.

“Presenting new analyses of the still relatively uncharted opening decades of Canada’s 20th century, the various chapters are concerned with connecting the circumstances and experiences of ordinary individuals with larger structural changes. They also attend to questions of reconstituting these experiences in their own terms,” he says.

Written by many of Canada’s leading historical researchers, The Dawn of Canada’s Century demonstrates the wide-ranging and revealing social histories made possible by the new Canadian Century Research Infrastructure (CCRI). The CCRI is an innovative database of harmonized, national samples of decennial census microdata from 1911 through 1951. It includes detailed geocoding and much accompanying documentation, among which is a large and diverse selection of contemporary newspaper commentary on census taking in each decade. The CCRI emerged from the legacy of Canadian historical microdata projects ranging from the pioneering community-level studies to the creation of the 1871 and 1901 national census samples and encouraged by parallel international developments.

“Although the 1911 national sample is only the first of the five created by the CCRI, due to confidentiality restrictions it is the only one that has been available to the public and thus most readily accessed by the various authors represented in the book,” says Darroch. “The others are available to researchers within one of Statistics Canada Research Data Centres.”

The topics and styles of analyses in the various chapters are diverse. They shed new light on topics, including identity and language, the socio-demography of aboriginal populations, national labour market dynamics, earnings distributions, social mobility, gender and immigration experiences, and the technologies of census taking.

Darroch joined York University’s Department of Sociology in its early years and has since conducted research and published in fields, such as residential segregation, ethnic relations, social mobility and class, and in social and population history and historical methods, with a particular emphasis on the history of families, ethnicity and class. He was a pioneer in the development of large-scale historical databases, beginning with the 1871 census database for Canada (with Michael Ornstein), purportedly the first national, historical microdata database ever made publicly available to researchers. For access to these and related data,visit the CHASS Data Centre’s Microdata Analysis and Subsetting with SDA website.

Darroch has served as the director of the graduate program in sociology and of the York Institute for Social Research. For many years, he was a co-director of the journal Histoire-sociale/Social History. His current work centres on the 19th- and early 20th-century history of households and families and on 19th-century geographic and social mobility in Ontario. He was a co-investigator in the Canadian Families Project, which explored the history of families in Canada based on its publicly available sample of the 1901 Canadian census. This was the basis of the book Household Counts: Canadian Families and Households in 1901 (University of Toronto Press, 2007) by Sager and Baskerville (in which Darroch is an author) and of the CBC’s 2001 radio documentary “A Century of Children” (“Ideas,” CBC Radio One). Darroch continues as one of the co-leaders of the Canadian Century Research Infrastructure and was director of the project’s York Centre during its eight-year term. The centre has been transformed into the York, Statistics Canada Research Data Centre (282 York Lanes).