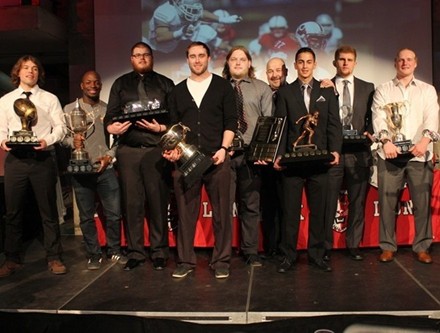 The top award, the Frank Cosentino Team MVP Trophy, was awarded to quarterback Myles Gibbon, who has been the leader of the offence since he joined the Lions in 2012.

This season, the fifth-year starting quarterback from Montreal finished seventh in the OUA in total passing yards and passing touchdowns. In addition to his passing expertise, he was also quick on his feet, leading all quarterbacks and finishing sixth overall in the OUA in rushing yards (531 on just 77 carries). He finished his career ranked fifth all-time at York in passing yards and passing touchdowns, and his passing total this season was the third-highest single-season mark in program history.

The Gridiron Scholar Award for Academic Excellence was earned by second-year linebacker Michael Runowski. In addition to his abilities on the field – he started all eight games and finished 10th on the team in tackles – he earned the team’s highest GPA for the 2012-13 academic year while in his first year at the Schulich School of Business. The Burlington, Ont., native is enrolled in 30 credits this year and is also part of the team’s leadership group and a student-athlete mentor in the PAWS program.

The Leonard Jean-Pierre W21 Offensive MVP Award was given to running back Errol Brooks and the Nobby Wirkowski Defensive MVP Trophy was awarded to defensive end James Tuck for the second straight season.

Brooks, of Toronto, was a force for the Lions in his only season with the program. He finished third in the OUA and 10th in the CIS in total rushing yards (701) and was also third in yards per carry (6.9). He twice rushed for more than 190 yards in a game to be recognized as an OUA peak performer. At the end of the season he was named an OUA first-team all-star, the first player from York to receive the honour since 2007. He also participated in the CFL’s Toronto regional combine last week and has been invited to an NFL combine in New Jersey.

Tuck, of Aurora, Ont., has been a major contributor on the defensive line since switching from linebacker after his first two seasons. The fourth-year pass rusher finished 11th in the OUA in tackles and tied for 13th in sacks. Last week he participated in the CFL’s national combine, earning an invite after a tremendous performance at the Toronto regional combine.

The Andre Durie Special Teams MVP Trophy was presented to punter/placekicker Nick Naylor of Abbotsford, B.C. The second-year kicker finished fourth in the OUA in field goal percentage (71%), fifth in kick-offs (33) and kick-off yards (1745) and 11th in conference scoring with 51 points. His single-season punt average of 36.7 yards is the second-best mark in York history.

The Jeff Johnson Rookie of the Year Award went to defensive back Samir Boulazreg. The Mississauga, Ont., native made an immediate impact at cornerback, ranking sixth in the OUA in interceptions (six), total return yards (69) and pass break-ups, (five) and was also third on the team in tackles (26). He ended the year by being named to the OUA’s all-rookie list.

Moore, a third-year guard from Whitby, Ont., is the backbone of the offensive line. He has started every game in his three seasons with the Lions and played every position on the line. He is also an intelligent player who helps the rest of the line with their assignments.

Kolankowski, a second-year centre from Etobicoke, Ont., is a dedicated student and athlete. He works in the gym and the film room and did not miss a game or practice this year despite suffering a broken hand. In addition to his success on the field, he maintains one of the highest GPAs on the team.