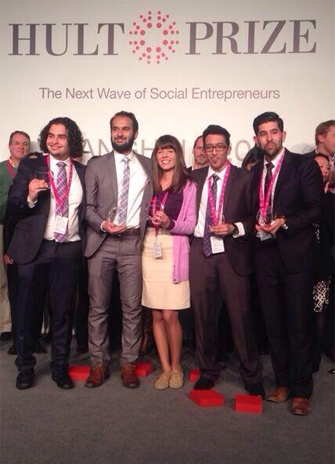 A team of undergraduate students from the Schulich School of Business at York University has qualified as one of only six teams from around the world to advance to the $1-million Hult Global Case Challenge finals in New York City in September.

On Sept. 22, Team Schulich will compete for $1-million in start-up capital for their social enterprise, REACH Diagnostics, against five other teams from University of Pennsylvania, MIT, HEC Paris, ESADE and the Indian School of Business that also won regional finals in other cities around the world.

The Hult Prize – the “Nobel Prize for B-schools,” according to Bloomberg Businessweek – brings together business students from around the globe to present solutions to a world problem. This year’s social enterprise challenge is “Improving Chronic Disease Care in Slums by 2019”. With more than 11,000 university students worldwide participating, the Hult Prize is the world’s largest and most prestigious student competition focused on creating social enterprise start-ups. The $1-million prize will be presented by former United States president Bill Clinton.

Team Schulich established a social enterprise called REACH Diagnostics, which is in the process of developing a patent-pending diabetes’ detection test that can be produced on an ordinary printer for $0.02. Diabetes affects 74 million slum dwellers, most of whom go untreated leading to other long-term illnesses and even premature death, says team captain Dhaman Rakhra, who is CEO of REACH Diagnostics.

Team Schulich’s business model relies on an Avon-type sales and distribution structure that would allow newly diagnosed diabetes patients in impoverished areas to become “catalysts” for change and to raise money for their own medical treatment by selling the low-cost urinalysis strips to others at risk within their community.

“The actual idea arose from us realizing that in order to make an impactful difference, we needed to disrupt the current life cycle of the slum citizens that we were looking to reach; not just diagnose the individuals in the cheapest and most effective manner, but empower them. We saw that these individuals are the catalysts for change in their communities,” says Rakhra.

The Schulich team also won the opportunity to spend two months this summer working to develop their business at the Hult Prize Accelerator, a social enterprise incubator in Boston, and a one-year membership in the Clinton Global Initiative, established in 2005 by Clinton to create and implement innovative solutions to the world’s most pressing challenges.

“Having the opportunity to spend a summer in Boston working on our own business will be an amazing experience,” says Hemanth Soni, chief technology officer. “One year ago when I first started at Schulich, I would never – in my wildest dreams – have imagined that I’d be pitching a social enterprise business to former President Bill Clinton and Nobel Peace prize winners.”

However, Team Schulich is acutely aware of “the sobering gravitas of our mission,” says Luca DeBlasis, Chief Financial Officer of REACH Diagnostics.

“This is no longer so much about the competition as it is leaving a positive impact on the world. Each of us has been affected by diabetes in some way – be it via close friends or relatives – and so we really feel strongly about the opportunity to provide those in urban slums access to diagnostics and care,” says DeBlasis.