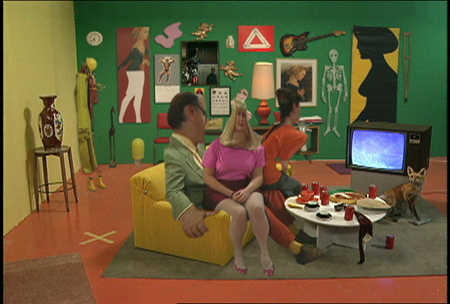 Work by acclaimed Canadian artist Michael Snow is featured in Corpus Collegium, a presentation of Sensorium: Centre for Digital Arts & Technology and the Open Media Lab at York University. Snow is a pioneering multi- and cross-disciplinary creator whose works in painting, sculpture, video, film, photography, holography, drawing, books and music have been seen around the world.

As part of his presentation for Corpous Collegium, Snow will screen his groundbreaking experimental film Corpus Callosum (2002), winner of  the Independent/Experimental Film and Video Award from the Los Angeles Film Critics Association. The screening takes place today from 12 to 1:30pm in the Nat Taylor Cinema, N102 Ross Building on the Keele campus.

“The corpus callosum is a central region of tissue in the human brain that passes ‘messages’ between the two hemispheres. Corpus Callosum, the film (or tape, or projected light work) is constructed of, depicts, creates, examines, presents, consists of and is, ‘betweens’. Between beginning and ending, between ‘natural’ and ‘artificial’, between fiction and fact, between hearing and seeing, between 1956 and 2002. It’s a tragi-comedy of the cinematic variables,” says Snow.

Immediately following the screening, from 3:30 to 5pm, Snow will be in conversation with 3-D digital design pioneer Greg Hermanovic, co-founder of Derivative and Side Effects software, and special effects supervisor and performer in Corpus Callosum. Their dialogue will be moderated by York visual arts Professor Nell Tenhaaf.

A reception will follow, all are welcome to attend.

Sensorium is a research centre based in the Faculty of Fine Arts at York University that supports cross-disciplinary work in application and content creation, artistic and scientific inquiry, policy development and critical discourse in digital media arts. The Open Media Lab in York’s Graduate Program in Film features symposia, guest speakers and presentations. It provides an informal venue for doctoral candidates and faculty members to explore the rich interface between research and creation.