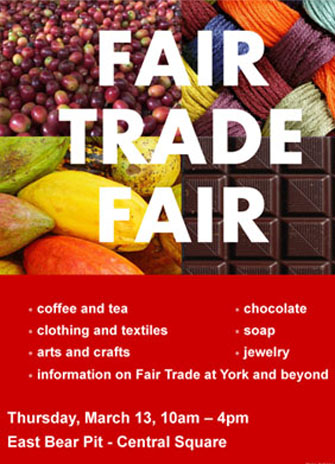 Are you interested in learning about fair trade at York University and beyond? Would you like to purchase fairly made goods? Why not consider stopping by the Bear Pit in Central Square on Thursday, March. 13 between 10am and 4pm for York’s annual Fair Trade Fair.

What is fair trade?

Simply put, fair trade is about ensuring that producers, typically from developing countries, receive a fair price for their products. But Fair Trade is also about information. Fair Trade Canada describes it as a “way for all of us to identify products that meet our values so we can make choices that have a positive impact on the world.”

In recent years, York has developed a number of fair trade initiatives. For instance, York has its own brand of fair trade certified coffee, Las Nubes, which is organically grown in the Las Nubes rainforest in Costa Rica (of which York is a part owner). Las Nubes coffee is available at the York Bookstore and all Food Services outlets. Also, in 2011 York became the first university in Canada to sell certified, fair trade clothing in its campus bookstore.

To learn more about fair trade at York and other similar initiatives, visit the Sustainability website or e-mail sustainability@yorku.ca.