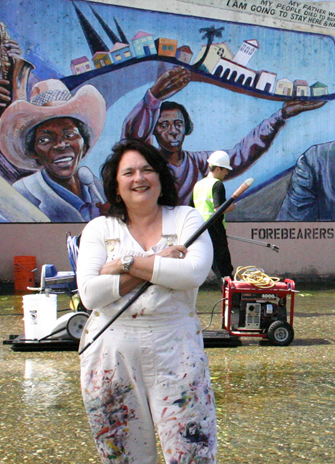 World-renowned Chicana (Mexican-American) muralist Judy Baca, a pioneer in public art, will give a talk titled “Excavating Land and Memory: The Public Art of Judy Baca” as part of the second Koerner Speaker Series in Neotropical Conservation, in association with the Faculty of Environmental Studies (FES).

Baca will discuss how land and memory are critical to the cultural preservation of indigenous communities. She will also address the issues of land conservation and the effect of megaproject development on the memory and tradition of indigenous people, as it similarly relates to proposed projects in the biological corridors of Costa Rica.

This lecture and discussion will take place Tuesday, March 18, from 6 to 8pm, in the Robert McEwen Auditorium, Schulich Seymour Building, Keele campus. A reception will follow the lecture. Everyone is welcome to attend this free event. To RSVP, fill out the RSVP form on the FES website.

Baca is an artist, educator and activist. She has worked extensively in the United States and internationally on community art mural projects to create what she calls “sites of public memory”. Her work creates landmarks in a process that is collaborative and organic, and that works towards environmental and social change.

Baca is the co-founder and serves as the artistic director of the Social and Public Art Resource Center also known as SPARC, which is an educational and organizing tool for the creation and preservation of murals and public art. She is best known for directing The Great Wall of Los Angeles, the longest mural in the world, which depicts the struggles of her Chicana/o community and the history of counter narratives.

Baca is recipient of several awards – most recently the 2012 recipient of the Outstanding Latino/a Award from the American Association of Hispanics in Higher Education. She is also a professor at the University of California in the César E. Chávez Department of Chicana/o Studies and in the Department of World Arts and Cultures/Dance in the School of Arts and Architecture.

The Koerner Speaker Series in Neotropical Conservation aims to promote and raise awareness of the Las Nubes Project, which is overseen by Professor Felipe Montoya-Greenheck, chair in neotropical conservation, FES, who will speak about the recent developments regarding the Las Nubes Project in Costa Rica. Las Nubes (“The Clouds”) is a rainforest in Costa Rica that has generously been donated to York University by Dr. Woody Fisher, a prominent Toronto physician, medical researcher and co-founder of the Canadian Liver Foundation.

This Koerner lecture in Neotropical Conservation is sponsored by the Koerner Foundation, the Community Arts Practice Program of FES, the Faculty of Fine Arts (Department of Visual Art) and Latin American Canadian Projects.