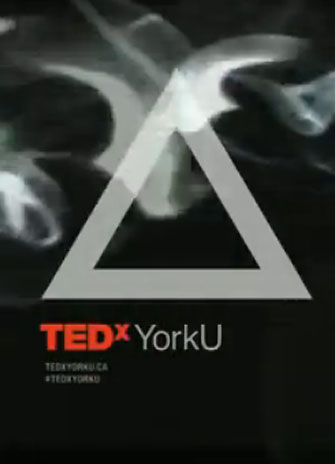 The theme of this year’s event is Combustion, the exhilarating – and sometimes terrifying – point of no return, where nothing will ever be the same again. Organizers have invited a dynamic group of individuals to present at this year’s event. Divided into three themes that relate to “Combustion,” TEDxYork U runs from 12 to 5:30pm. Session one features speakers discussing the “elements” of combustion. Session two is devoted to “ignition” and session three explores concepts that are “accelerators” of combustion. A live stream is available on the TEDxYorkU website.

Elements opens with a performance by Serpentina North Ensemble, a tribal fusion troupe. They incorporate classical Persian, cabaret, and other dance forms into their performances. The group performs in Kensington Market during Pedestrian Sunday, but has also been a part of the International Stage at the CNE, Funkasia at Pride, Mirage’s Twilight show, and several editions of Inversion.

Jeff Perera, a community engagement manager for White Ribbon, the world’s largest movement of men working towards a new vision of masculinity to inspire men and boys to help end gender-based violence. Perera speaks to people from all occupations about how society’s unattainable concepts of masculinity are affecting men and boys as well as women and girls. He started Higher Unlearning, an online space dedicated to exploring how ideas of gender and masculinity play out in everyday life.

Janet Morrison, vice-provost students at York University, is passionate about the importance of the student success and community engagement. As member of the York U  community for the last 13 years, Morrison brings with her more than 20 years of experience in the postsecondary sector as both a teacher and leader in the world of student affairs. She is committed to the growth of student success on both a personal and professional level.

Unconventional communication systems are Lassonde School of Engineering Professor Andrew Eckford’s specialty. As an educator and researcher in the field of electrical engineering and computer science, Eckford’s research on molecular communication has garnered international media attention. A graduate of the Royale Military College of Canada and the University of Toronto, Ecford has been a member of the York community since 2006, where he continues to encourage his students to find the connections between science and communication.

Toronto based writer, communications consultant, actor, editor and teacher, Jennifer Sipos-Smith, lives and breathes the art of communication. A faculty member at York University’s Glendon campus and the founding director for the Glendon Writing Center, Sipos -Smith is known for her ability to use language and humour to reveal tensions between the creative and critical aspects of teaching and learning.

A kinesiology student in the Fitness Assessment and Exercise Counseling certificate stream in York University’s Faculty of Health, Luke Durward is passionate about the importance of health and fitness. As the award recipient of the 2013 – 2014 “This Is My Time” contest, Durward shared his inspirational vision of reversing the growing number of diabetes type 2 and obesity in the world. He believes the best way to encourage and empower people to change their lives is through education.

York U business administration alumna Colleen Johnston (BBA ’82) is currently Group Head Finance, Sourcing and Corporate Communications, and Chief Financial Officer, TD Bank Group. She received her chartered accountant designation in 1984 and in 2006 was elected a Fellow Chartered Accountant (FCA), the highest designation conferred by the Institute of Chartered Accountants of Ontario, recognizing her outstanding career achievements and dedication to community activities. In 2012, she was recognized as Canada’s CFO of the Year, an award that is presented annually by Financial Executives International Canada, Pricewaterhouse Coopers and Robert Half International.

Accelerator, opens with a performance by Flamenco guitarist Roger Scannura and his daughter actress, Flamenco, Bellydance and Zambra Mora artist Anjelicia Scannura. Roger Scannura pursued his love of flamenco guitar under the instruction of the famous Pepe Habichuela. He has recorded numerous albums and performed worldwide, and  now teaches in the Faculty of Fine Arts. Anjelicia Scannura an actress, known for Camp Rock (2008), Manson, My Name Is Evil (2009) and Overruled! (2009). She is an expert in the fields of Flamenco, Irish dancing and Bellydance.

Jessica Cook, a master’s candidate with the Faculty of Environmental studies at York University, is dedicated to deepening her understanding of Indigenous cultural resurgence and community sustainability within Toronto. As a member of the indigenous community, Jessica strives to learn to live in a way that pays respect to those around her. Her knowledge and appreciation of her culture has come from the strength and leadership of the Indigenous women she has encountered in her life.

Distinguished research Professor of Psychology at York University and a Senior Adjunct Scientist at the Hospital for Sick Children, Debra Pepler is committed to learning about and promoting safe and healthy relationships for children and youth. Her research, focused on aggression and victimization among children, adolescents, and children in families at risk, has led her to the role of consultant and researcher of international acclaim. She is a consultant and researcher for four distinct programs: SNAP® Girls’ Connection – for aggressive girls at the Child Development Institute; Breaking the Cycle – for substance using mothers and their young children; Pine River Institute for youth with substance and mental health problems; and the Canadian Red Cross Walking the Prevention Circle – a program developed by and for Aboriginal communities.

PhD candidate in the School of Kinesiology and Health Science in the Faculty of Health, Noah Wayne’s research focuses on health coaching and the use of technology to help improve chronic disease management. As a certified Exercise Physiologist (CSEP), Wayne created and coordinates a clinical and community based Exercise Education program, aimed at integrating exercise into primary healthcare settings. His love of health and teaching has helped him to share his knowledge with those who suffer from chronic medical conditions, such as diabetes, by teaching them how to stay active in a safe and healthy manner.

A self-proclaimed philosopher and thinker, York alumnus Ayden Byle (BA ’97) has traveled the world, living, working, and studying in countries in Africa, Europe, and Asia. With a mind for marketing, Byle became a pivotal part of numerous online start-up companies, including one of which debuted as an initial public offering on Toronto’s Venture Exchange. Now the associate national director of sales at the Pixel Ad Network, he is helping car manufacturers spend their online advertising dollars.

For more information on announcers, sponsors and organizers, visit the TEDxYorkU website.