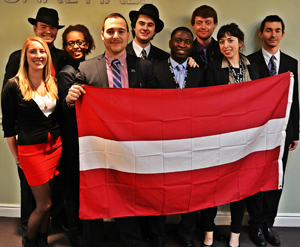 Last month, a team of Glendon students representing Latvia at the 29th International Model NATO Conference, made a huge impression because they took most of the conference awards. The conference, which took place Feb. 13 to 16 in Washington, D.C. saw an international cohort of student teams representing NATO member countries, gather to debate a variety of NATO decisions.

“My cadets and I were enormously impressed by your team’s enthusiasm and serious dedication to this important event,” wrote Professor Schuyler Foerster, faculty adviser for a team of cadets from the United States Air Force Academy. Foerster made his comments in a letter to Barbara Crow, interim dean of the Faculty of Graduate Studies at York University. “We were all the more impressed when we realized that your team had travelled to Washington at their own expense, which must be the ultimate expression of their dedication.

“York University is well known, but I can assure you that Glendon College was placed squarely on the map,” added Foerster, the Brent Scowcroft Professor of National Security Studies at the USAF Academy Department of Political Science and Eisenhower Center for Space and Defense Studies.

Otto Faludi, a first-year master’s student in the Public and International Affairs Program, led the Canadian delegation and acted as the team’s faculty adviser. The nine-member team came from the Foreign Affairs Council of Glendon (FACG). The team was comprised of five graduate students and four undergraduate students. As part of their preparation for the conference, the Glendon delegates met with Juris Audarins, ambassador of the Republic of Latvia prior to the conference. Audarins briefed the team on the policies and perspectives of Latvia on NATO and the European Union. That information was critical to the team’s success in Washington, said Faludi.

The team also consulted Juris Pogrebnaks, deputy chief of mission at the Latvian Embassy in Washington. Pogrebnaks briefed them on a wide range of topics including the status of the NATO Strategic Communications Centre of Excellence in Latvia’s capital, NATO’s Theatre Missile Defence program, energy security and Latvia’s defence budget.

A visit to the U.S. State Department provided the delegation with an opportunity to talk to a NATO policy officer in the Bureau of European and Eurasian Affairs.

Because of their stellar performance in Washington, the Glendon team was invited to participate at the upcoming model Arab League taking place in Washington in March and will represent Tunisia.

They are working to try to secure funding so that they can attend the event. As a student club, the FACG had $1,500 in funding for the Washington conference, but each student still had to come up with $1,000 of their own money for the trip, said Faludi.

“We strongly believe student participation in these events should be a cornerstone of experiential education,” said Faludi.

While at these conferences, students are making connections and networking with diplomats and industry insiders. The conferences are scouting and recruiting events for organizations, noted Faludi, and students could end up working at NATO, the World Trade Organization and the Organization of American States.