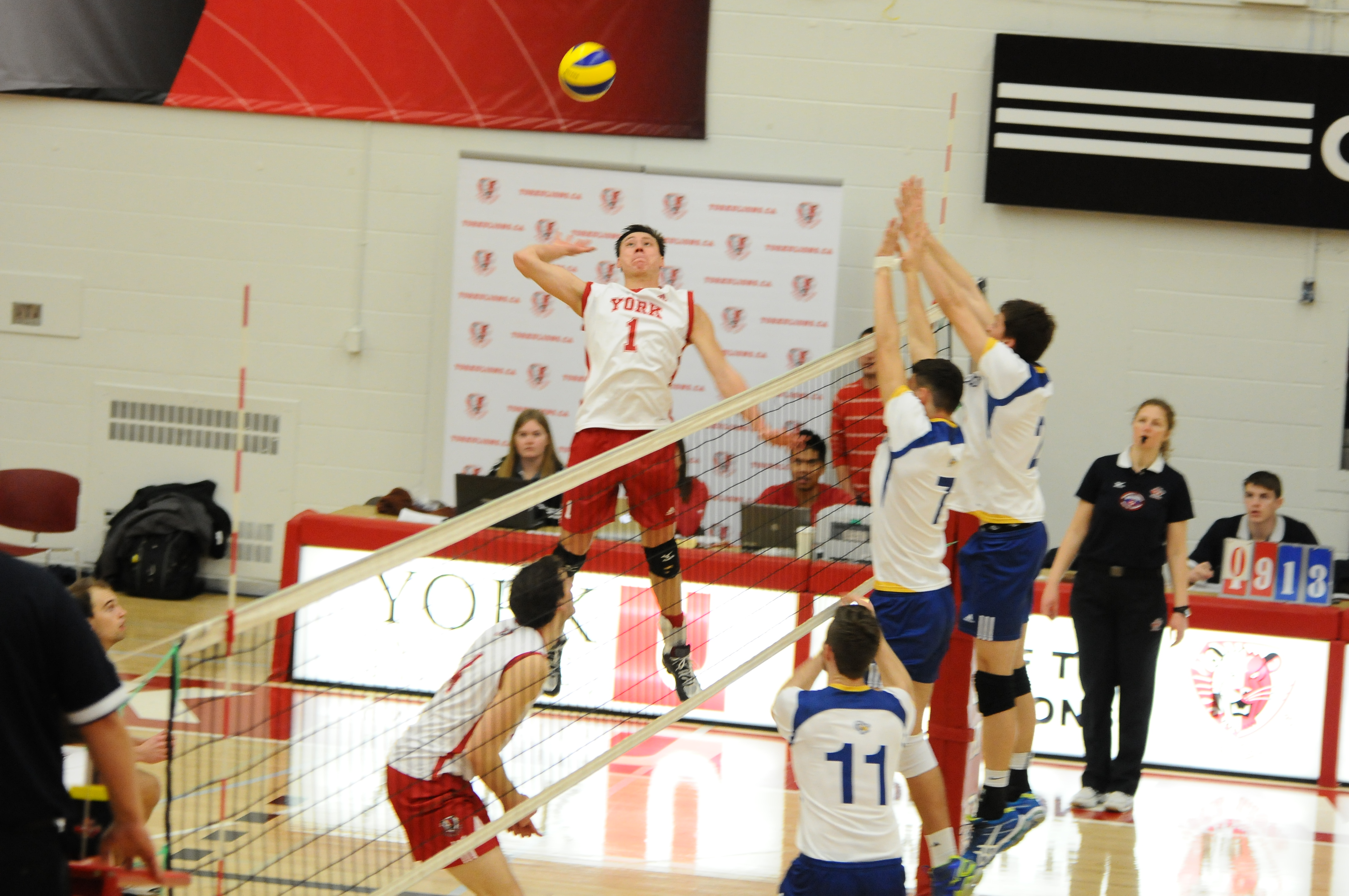 York Lions volleyball Ray Szeto during the game against the Ryerson Rams on Saturday.

The Lions continued to roll on Sunday, earning a hard-fought 3-2 victory over the visiting Toronto Varsity Blues.

The Lions led 2-1 in the match after a thrilling 28-26 third-set victory, but the Blues took the next one to force the deciding fifth set. The Lions made quick work of the Blues in the final frame, rattling off five straight points early to build an insurmountable lead and win the match.  More details.

The York University Lions men’s basketball team cruised to a convincing victory Friday against their arch rival, the University of Toronto Varsity Blues, on home court at the Tait McKenzie Centre by a score of 85-70.

For the Lions, Nick Tufegdzich led the team with 18 points and seven rebounds, while Daniel Tulloch followed with 15 points, five rebounds, four steals and four assists. He also had two monster dunks in the game that had the crowd on its feet.  More details.

The next night, the Lions came within one basket of an upset victory over the No. 4 nationally-ranked Ryerson University Rams, ultimately falling 75-73. The Lions tied the contest at 73-all after Richard Iheadindu made both free throws after getting fouled attempting a lay-up. On Ryerson’s ensuing possession, Jean-Victor Mukama scored on a put-back with 10 seconds remaining to give the Rams the lead once again, and Tulloch missed on a long three at the buzzer to give the Rams the win.

The thrilling end to the contest capped a tremendous fourth quarter in which the Lions came back from five points down – 56-51 – to tie the game on three separate occasions. Iheadindu scored on a fast break after a pass from Phillip Cunningham-Gillen to tie the game 58-58 early in the frame, and Tulloch nailed a lay-up minutes later to make the score 63-63. But each time the Lions scored the Rams were able to counter at the other end of the floor, never once falling behind the Lions after the opening minutes.  More details.

Led by Mariah Krancevich‘s two-goal game, the York University Lions women’s hockey team posted an upset victory over the University of Toronto Varsity Blues by a score of 4-2 in enemy territory at Varsity Arena on Friday night.

Krancevich netted the winning goal 4:43 into the third period and also scored the game’s opening goal, her third and fourth of the season.  More details.

The following night, Shawna Griffin scored 3:11 into overtime to lead the No. 4 nationally-ranked Queen’s University Gaels to a 2-1 victory over the Lions at Canlan Ice Sports.

Trailing by one late in the game, Lindsey Cochrane supplied the lift the Lions needed in the third period, roofing a top-shelf snipe past goaltender Mel Dodd-Moher to even the score at a goal apiece midway through the final frame.  More details.

Jordan Davies scored in overtime to push the York University Lions men’s hockey team past the University of Waterloo Warriors Friday, winning by a score of 3-2 in Waterloo, Ont.

Davies capitalized on a bouncing puck that landed right on his stick just before time expired in the extra frame, tapping in the winning goal at 4:37 of overtime. The goal was his second of the game.  More details.

Two nights earlier, the Lions erased a two-goal deficit in the third period but ultimately fell in the shootout in a 4-3 loss to the Brock University Badgers at Seymour-Hannah Centre in St. Catharines, Ont.

Defence man John de Gray and centre Tyler McGee netted third-period goals to tie what was a 3-1 contest and give the Lions one point in the standings, but Brock goaltender Adrian Volpe stopped all four shooters in the shootout to give Brock the extra point.  More details.

The York University Lions women’s basketball team won its second straight game with a 58-48 victory over the Ryerson University Rams at the Tait McKenzie Centre on Saturday night.

The Lions led wire-to-wire, scoring the first four points of the game and opening up a lead as big as 17 in the third quarter. The Rams made things interesting in the fourth, as the Lions went more than seven minutes without a basket and Ryerson closed the gap to six, at 49-43. But a pair of jumpers by Llyandra Kerr restored the eight-point advantage, and the Lions sealed the win with some clutch free throws down the stretch. Kerr finished with 10 points and eight rebounds.  More details.

The win was their second of the weekend, as the Lions also defeated the University of Toronto Varsity Blues by a score of 41-38 on home court. For the Lions, Nadia Qahwash led the way with 12 points, six steals, four rebounds and an assist, while teammate Kerr followed closely behind with 10 points, eight rebounds two blocked shots and two steals.  More details.

The York University Lions women’s volleyball team bounced back from its loss on Saturday to defeat the University of Toronto Varsity Blues in straight sets on Sunday afternoon at the Tait McKenzie Centre.

The two teams traded points back and forth throughout the first set, but the Varsity Blues began pulling away and led 16-10 at the technical timeout, the largest lead of the opening frame. But the Lions began chipping away at the deficit and finally caught up at 22-22. They held a set point at 24-23 but could not convert, and then fought off a set point for the Blues at 24-25. The Lions then won the next three points to take the first set 27-25.  More details.

Saturday’s loss to the Ryerson University Rams was just their second of the season as the Lions went down by a score of 3-1. Ryerson claimed the first two sets 25-18 and 25-21. Momentum shifted in the third as the Lions won 25-16, but the Rams ultimately clinched the match in the fourth and final set by winning it 25-21.  More details.

Thomas defeated Kyle Bonk from the Western University Mustangs by a score of 9-6 in the semifinals to advance to the title match, where he was edged 4-3 by Alex Thoms from the University of New Brunswick Varsity Reds.

He was one of three Lions to record a top-six finish at the meet. Greg Pierzchala just missed out on a medal with a fourth-place finish in the 72kg division, while rookie Thomas Carroll ended up in sixth place in the 61kg weight class.  More details.

Track and field Lions win seven medals at Can Am Classic

Members of the York University Lions track and field team combined to win seven medals at the Can Am Classic in Windsor, Ont., this past weekend.

Ayo Agusto had a tremendous weekend, winning three medals on the track. He finished second in the 300m in a field of 24 runners with a personal-best time of 35.16 seconds, which also surpassed the OUA standard. The third-year sprinter also contributed to a pair of gold medals in the 4x200m and 4x400m relays.  More details.