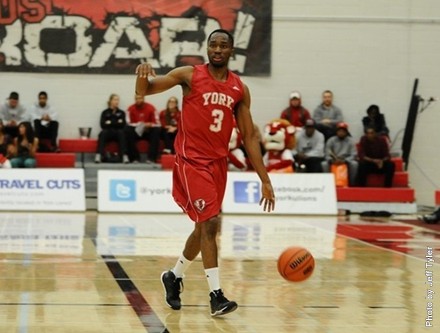 Richard Iheadindu scored a game-high 26 points to lead the York University Lions men’s basketball team to a big 86-74 victory over the Queen’s University Gaels in the ARC main gym in Kingston, Ont., on Saturday.

Iheadindu also added three assists, three steals and two rebounds for the Lions, and was one of five members of the team to score 11 or more points. Ryan Ejim put up a double-double with 15 points and 11 rebounds in just 21 minutes off the bench, while Matthew Ziobrowski had 12 points.

Aaron Rados and Daniel Tulloch both returning to the line-up after injuries kept them out of games in the fall, scored 10 and 11 points, respectively.

The win was an important one in the standings for the Lions as it improved them to 6-4 and pulled them into a tie with Queen’s in the tight Ontario University Athletics (OUA) East playoff race. The two squads are tied for fifth with 12 points. More details on the York Lions website.

Members of the York University Lions Track & Field team combined to post 26 podium finishes at its opening two meets of 2014 this past weekend.

The throwers kicked things off with an impressive showing at the New Year Opener in Guelph, Ont., on Friday with six top-three results. Eric Brathwaite led the way with a pair of gold medals in the shot put and weight throw, surpassing the CIS standard in both events. His distance of 16.50m in the shot put was a new personal best.

The York University Lions women’s basketball team began 2014 with a 74-61 loss to the Queen’s University Gaels on the road in Kingston, Ont., on Saturday.

The Gaels scored the opening 10 points of the game, but York countered with three 3-point shots on consecutive possessions to keep themselves in the contest early. Queen’s led 14-9 after the opening 10 minutes.

The Lions found their offensive stroke in the second quarter and put up their highest point-total of the night, pouring in 22 and cutting the deficit to just two points heading into the half. The third quarter was also a tightly-contested affair, with the Gaels extending their lead to four by outscoring the Lions by just a basket, at 20-18. More details.