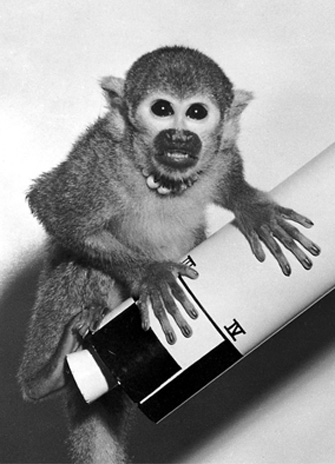 NASA pioneer Miss Baker was born in Peru, twice-married,  and lived out her retirement in a modest bungalow in Alabama where she answered fan mail in her spare time.

She was also a squirrel monkey.

Now, more than 50 years after Baker’s rise to fame as one of the first two primates NASA launched into space and recovered alive, a new paper published by York University researcher Jordan Bimm reveals how her successful 1959 flight led to a strange shift in status from nameless monkey to full-fledged honorary human – with all the gendered expectations of a 1950s American housewife.

Bimm’s paper “Between Human and Animal Astronauts: Anthropomorphizing Monkeys in Early American Space Medicine”, published this month by Quest: The History of Spaceflight Quarterly, details how Baker and female rhesus monkey Able were introduced to media after their flight and subsequently made the cover of LIFE magazine as ambassadors of NASA’s space program, capturing the imagination of a cold war-era public eager for good news during the escalating space race.

“I wanted to draw a contrast between their lives before and after the flight, from data-producing scientific models of human bodies, into marketable caricature social models for humans,” says Bimm. “Suddenly, they were elevated in status, and were regarded and portrayed as having a number of human qualities by NASA officials, military medical doctors, the media, and the general public.”

Bimm writes that not only were Baker and Able welcomed back to Earth with new human status, but gender became an important part of their identity. Though Able died soon after the flight, Baker lived another 25 years, during which time handlers built a relatable narrative for her as a stereotypical 1950s housewife instead of as a more “masculine” space explorer: She was referred to as Miss Baker, was “married” twice to fellow squirrel monkeys in ceremonies that doubled as publicity fundraisers, and during interviews her handlers expressed hopes that she would settle down and “raise a family”.

This reveals NASA’s complicated view of women in the space program in the late 1950s and early 1960s, says Bimm. While female monkeys were sent into space without their sex being an issue, space medicine experts were anxiously investigating the possibility of sending female humans into space. In a study, female pilots were shown to match all-male astronaut results on medical and psychological tests, but in the end NASA decided to exclude all women from spaceflights.

Ultimately, Bimm concludes that this characterization of Baker and Able was appealing because it rendered ‘natural’ the political and military impulses that fueled early space exploration.

“Their stories helped to ‘nature our culture’,” says Bimm. “They made the pursuit of space science and technologies seem like a natural and logical ‘next step’ in what was supposedly a natural progression from ape to man to astronaut.”

To listen to Bimm speak about his research on the Life Sciences Podcast, click here.