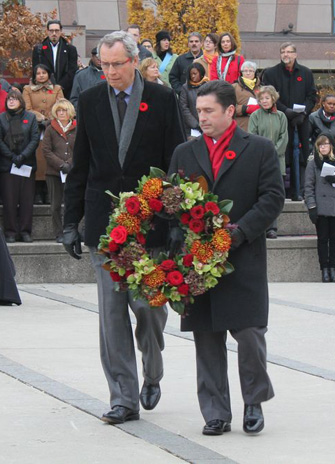 The bitter November wind and rain did little to deter faculty, staff and students from attending the University’s Remembrance Day ceremony on Monday.

At the Keele campus, a crowd of more than 200 people gathered at the flagpole in the Harry W. Arthurs Common. The ceremony saw the lowering of the flag to half mast, readings of important poems and passages from traditional texts, and the laying of wreaths. It began with the processional led by Ian MacDonald, a pipe major with the Toronto Police Pipe Band, who led  faculty, staff and students out of the Vari Hall Rotunda to the flagpole on the Harry Arthurs Common. Joining the York community in the processional and for the service were children

Rhonda Lenton, provost and vice-president academic, welcomed faculty, staff and students to the ceremony. “On this the most somber of days, we wear the poppy in pride and to remember,” said Lenton. She spoke about the more than 1.5 million soldiers who put their lives on hold and made the ultimate sacrifice, giving their lives so that future generations could live in freedom. “At a time when many were just beginning their lives, they left all that was familiar to them to make this journey,” she said. “We must never forget all the brave men and women, past and present, who gave up their dreams so that we could realize our dreams.”

Janet Morrison, vice-provost students, read “Anthem for Doomed Youth” by Wilfred Owen (March 18, 1893 to Nov. 4, 1918). Owen was an English poet and soldier, one of the leading poets of the First World War. His war poetry captured the horrors of trenches and gas warfare. Owen was heavily influenced by his friend and mentor Siegfried Sassoon. Among Owen’s best-known works – most of which were published posthumously – are

Lieutenant-Colonel Allan Best, (BA Spec. Hons. ’97), the commanding officer of the 48th Highlanders of Canada, delivered remarks on behalf of the Canadian Armed Forces. He spoke about being a member of the 9/11 generation and the fundamental changes that the Canadian Armed Forces experienced after the attack on the World Trade Center. He urged those present to remember veterans past and present and recalled his memories of the 12 young Canadians he knew who lost their lives in Afghanistan. He urged those present to embrace their university education because it offered the academic, analytic and critical thinking skills that are so important in defeating ignorance and extremism.

University Professor Emeritus John Lennox followed Best’s remarks with a reading of the poem “High Flight” by Officer John Magee Jr. Lennox was followed by Sergeant Rupinder Kambo, who read the Act of Remembrance, an excerpt from the 1914 poem “For the Fallen” by British author Laurence Binyon.

Among those at the ceremony were special guests Maria Elrod and her son Patrick, who attended in memory of her husband, American veteran Joseph Elrod (MA ’13 [Posthumous]). Elrod was a graduate student at York University and an American Marine who had experienced two tours of duty in Afghanistan in 2002 and 2004. After the Marines, he earned a BA in Geography at the University of South Florida in 2011. He then moved, with his wife and three children, to Canada in 2011, where he attended York University’s Master of Arts in Geography program. In February of 2013, he took a job in Afghanistan as a civilian contractor for DynCorp International supporting the Combined Security Transition Command – Afghanistan program. He was killed on May 16 in Kabul, Afghanistan. The 2013 Remembrance Day ceremony at York University was dedicated to Elrod and York alumnus Brent Donald Poland (BA ’92), who was killed in Afghanistan in 2007.

The children of the York University Co-operative Daycare sang “The Poppy Song” and the ceremony concluded with “God Save the Queen”.