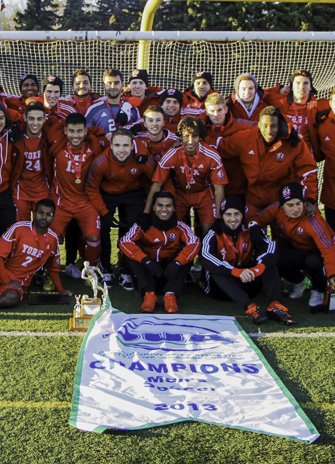 The OUA banner is the team’s first since 2007 and the third overall for the program.

Second-year striker Mark-Anthony Kaye scored the lone goal of the game in injury time of the first half. Just before time expired, midfielder Malcolm Loukides sent a long ball in to Kaye in front of the net. Kaye made a move to his left and then went back to his right and sent a great shot on net that deflected off the foot of a Ryerson defender and into the back of the net.

The two teams traded chances back and forth in the first half of the game as action went up and down the field. York goalkeeper Sotiri Varlokostas and his counterpart at Ryerson, Christian Maraldo both came up big on numerous chances.

Ryerson had the best opportunity for a goal early on but the shot went off the outside of the post.

The Lions nearly opened the scoring in the 40th minute when rookie Dylan Sacramento made a gorgeous move the far side, spinning away from the defender while maintaining possession of the ball and firing a hard shot at Maraldo. The rebound came out to Kaye, who got another shot off but it was blocked by a defender.

Both teams finished the first half with four shots on goal.

Play slowed down in the second half as the Lions settled into a more defensive mindset with the lead. However, they still continued to pressure up front when the opportunity presented itself and nearly extended their lead to two when Jonathan Lao put the ball away, but the goal was waved off on an offside call.

The Lions outshot the Rams 5-2 in the second half. Ryerson nearly found the equalizer on the last play of the game, when a throw-in to the centre of the box was headed by Maraldo toward the net. Varlokostas was there to make the save, and the final whistle blew immediately after.

Fourth-year defender Casey D’Mello was named the player of the game for his tremendous efforts at the back.

The Lions will now look ahead to the Canadian Interuniversity Sport (CIS) championships, beginning on Thursday, Nov. 7 at the University of New Brunswick in Fredericton. The Rams also booked their tickets to the national tournament with their semifinal win on Saturday.