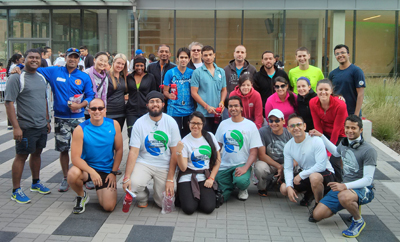 This year was the 33rd anniversary of the Terry Fox Run in Canada and York University faculty, staff and students marked the occasion by raising $17,000, which surpassed last year’s total of $14,000.

Student runners and volunteers at the finish line

It was also the first time that the run went off-campus, using an expanded five kilometre route through the Black Creek and Huron-Wendat trails, which provided participants with an opportunity to explore the campus and beyond.

The run took four months of planning and training volunteers under the direction of Ariel Phan, student ambassador. Volunteers focused on encouraging participants and keeping them safe and well hydrated. The route, while accessible, was more challenging than in previous years.

“This year we had over 300 participants, including many future York students on their two-wheelers. We also had over 40 volunteers – including York is U students, high-school students and police on bikes – to assist and motivate the participants throughout the event,” said Phan.

A team of student-peers from the Health Ed team led participants in a warm-up before they hit the run. A musical group hailing from Bethune College known as “Sunday Morning,” volunteered their musical talents and provided covers of some well-known rock/folk tunes, which got run participants and volunteers energized. The York Federation of Students donated water bottles and the City of Toronto set up their free water station to reduce water-bottle waste.

As with previous years, there was a little “healthy” competition between administrative units and the winner of the administrative challenge was Team Schulich, which had the best showing with 55 participants and won the “first prize” of $1,000 in “Shoukri Dollars”. The Advancers, led by Jeff O’ Hagan, York’s vice-president advancement, also had a strong showing and received an honorable mention.

The participation of York University community members in this event contributed to the nationwide effort to keep Terry’s inspiring story alive and to raise awareness and important funds for cancer research.