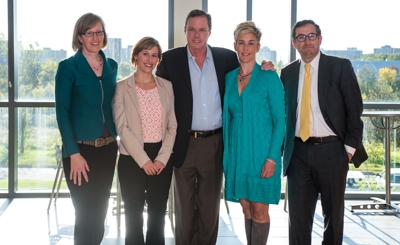 The memorial internships honour Osgoode alumni John Plater (LLB ’96) and James Kreppner (LLB ’89), who, in Cumming’s words, “devoted their professional and personal lives to the task of making the Red Cross, the provincial and federal governments, the corporations who manufactured the medicine, and later the Canadian Blood Services accountable and responsible for the safety of our blood supply and blood products derived from it.”

This year marks the 20th anniversary of the establishment of the Royal Commission of Inquiry on the Blood System in Canada headed by Justice Horace Krever. The Krever Inquiry, which looked into how the national blood supply came to be contaminated with two infectious viruses, Hepatitis C and HIV, produced a landmark report that was tabled in the House of Commons on Nov. 26, 1997. The report made a number of recommendations, including the creation of Héma-Québec for Quebec and Canadian Blood Services for the rest of the Canada, and recommendations regarding compensation for persons who had received contaminated blood.

The tainted blood scandal and the Krever Inquiry form the backdrop of Tainted a play by Kat Lanteigne. A production of Tainted, directed by Vikki Anderson, is running until Oct. 12 at the Aki Studio Theatre, Daniels Spectrum, 585 Dundas St. E.