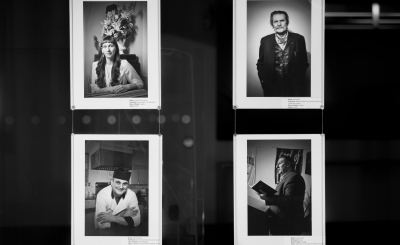 A collection of photographs of members of the Canadian Roma (Gypsy) community is now on display at the Osgoode Hall Law School Library. The exhibit, Roma Rising / Opre Roma – Portraits of A Community (romarisingCA), was created to challenge stereotypical views of the Roma community. Opre Roma derives from the Romani language, Romanes, and translates to “Rise up Roma”. The exhibit, sponsored by the Roma Community Centre (RCC) based in Toronto, will be on display until Oct. 4.

RomarisingCA stems from an educational initiative called Roma Rising / Opre Roma, which was funded by the Ontario Ministry of Community Safety and ran from September 2012 to April 2013.

“The goal of the Roma Rising / Opre Roma initiative was to encourage Romani youth to use education to transcend the barriers of racism and discrimination that they frequently struggle against,” said Gina Csanyi-Robah, executive director of the RCC. “By meeting weekly with Romani students in the Toronto District School Board and introducing them to positive stories of individual success in the community, we hoped to encourage them to pursue education and cultivate self-esteem and leadership skills. The collection of romarisingCA photographs was a means of reinforcing these objectives.”

The RomarisingCA exhibit features 24 black-and-white portraits by photographer Chad Evans Wyatt. The photographs feature Canadian Roma who are successful in middle- and professional-class occupations. The RCC invited Wyatt to create romarisingCA, adding to other editions of the exhibit in the Czech Republic (romarisingCZ), Poland (romarisingPL), Hungary (romarisingHU) and Slovakia (romarisingSK). A photograph of Osgoode Juris Doctor student Jennifer Plyer-Danch is one of the 24 portraits featured in the romarisingCA collection of photographs. RomarisingCA had its initial exhibit on April 4, which is Refugee Rights Day in Canada, and it was introduced by the Canadian Civil Liberties Foundation, the RCC and Osgoode Professor Sean Rehaag.

In an article published in the Toronto Star, titled “Toronto photo exhibit sheds new light on Roma in Canada”, Wyatt said he originally began romarising because he was motivated by how Roma were portrayed in Czech media and decided to find Roma who defied the stereotype to present a different portrait.

Csanyi-Robah hopes the photos of Canadian Roma, half of whom are former refugee claimants, “will help to deconstruct pervasive negative Gypsy stereotypes that exist in Canadian society.” Since 2008, language referring to “bogus refugees” that abuse Canada’s refugee determination system and social safety net has undermined and destroyed the genuine refugee claims of thousands of Romani asylum seekers across Canada, especially in southwestern Ontario, she said.

“The frequent depictions of rampant “Gypsy criminality” have been used to reinforce and exploit negative Gypsy stereotypes and racist attitudes that cause the Romani community to suffer from discrimination and prejudice when accessing the social services, health care, education, housing, employment and legal help in Canada.”

Osgoode Professor Sean Rehaag, who teaches and researches in the area of refugee law, has written about the Romani plight and also coordinated an educational workshop at Osgoode in October 2012 called “Roma Refugees and Canadian Racism”.  He agrees with Csanyi-Robah that much more needs to be done to counter stereotypes of Canadian Roma.

“The Roma community in Canada has suffered from bad press of late,” said Rehaag, pointing to negative comments by certain politicians and pundits. “The romarisingCA portraits challenge these offensive characterizations by highlighting the contributions that Roma Canadians make to the broader community as teachers, business leaders, medical professionals, artists – and even as law students.”

Wyatt says of his Roma portraits: “These are people, mostly unremarkable, who achieve in life careers that society understands and demonstrate that human aspiration is not limited to any one ethnic or cultural group.”

RomarisingCA is one of several art initiatives that Osgoode Hall Law School has supported as part of the school’s ongoing strategic objective to use art to help explore the experience of law and justice and strengthen community.

Earlier this year, Osgoode hosted the Face of the Łódź Ghetto exhibition in the law library as well the school’s Aboriginal Lands, Resources and Governments Intensive Program’s “Faceless Dolls” project.  In addition, Osgoode launched its inaugural Artist-in-Residence program this year, selecting visual artist Cindy Blažević to work on a photo essay project on the decommissioning of the Kingston Penitentiary in 2014.  Osgoode has also commissioned Gitxsan artist Charles Peter (Ya’Ya) Heit to develop a signature work of art for the mixing area in the Osgoode building that expresses a relationship to indigenous peoples and indigenous law.

Roma Rising / Opre Roma was funded by the Government of Ontario, in partnership with the Roma Community Centre, York Regional Police and St. Christopher House.

RomarisingCA exhibit viewing hours are Monday to Thursday from 8am to 10pm, Friday from 8am to 5pm, and Saturday and Sunday from 10am to 6pm. Admission is free. Visit the Roma Rising / Opre Roma website for more information.