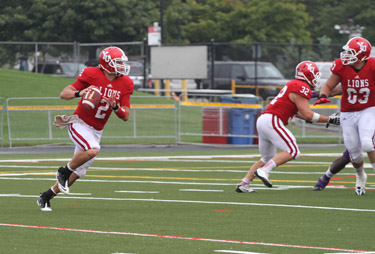 The Lions erased a 15-5 half-time deficit with a huge third quarter, putting up 23 points and holding the Golden Hawks scoreless to take a commanding 28-15 lead into the final frame. The win was the Lions’ first over the Golden Hawks since 2002 and improved their record to 1-1 on the season, while the Golden Hawks fell to 0-3 with the loss.

The Lions were led on offence by fifth-year starting quarterback Myles Gibbon, who finished the game with 211 yards through the air, another 155 on the ground and three total touchdowns – two passing and one rushing.  More details on the York Lions website.

The Lions controlled play from the start and got on the board in the sixth minute when Jamie Strachan scored a try and Alexis Boltsis converted the kick, one of her four conversions on the day.

The Blues had a couple of chances deep in Lions territory in the first half but were unable to push past the goal line. York’s Aisan Fazeli and Fedelia Omoghan also scored tries in the first half to give the Lions a 19-0 lead at the midway point of the game.  More details.

Rookie midfielder Dylan Sacramento scored a hat trick on Sunday afternoon to lead the No. 2 nationally-ranked York University Lions men’s soccer team to a dominant 5-1 victory over the visiting No. 10 Western University Mustangs at York Stadium.

Sacramento was all over the field in this contest, recording a total of seven shots. His first goal, also the first of his career, stood up as the game-winner and came in the 18th minute on a gorgeous shot from 15 yards out. He was well right of Western goalie Adam Majer but stroked the ball perfectly, curling it around Majer and just past the goal post.

He scored again in the 54th minute and capped off the hat trick in the 61st minute with nearly identical goals. In each, he received the ball more than 25 yards out and fired a hard shot off his right foot that sailed past Majer.  More details.

One day earlier, the Lions recorded a 2-0 victory over the University of Guelph Gryphons at the Gryphon Soccer Complex. The two triumphs extend the team’s regular-season unbeaten streak to an impressive 24 games.

The Lions showed no signs of slowing down in this one, dominating from the opening whistle despite slippery conditions at the Gryphons Soccer Complex. York defender Daniel Fabrizi scored the first goal for the Lions in the 30th minute of play.

The goal was the team’s first of the season and improved the Lions’ record to 0-2-2 on the year. For the Mustangs, it was the first game they did not win this season but they remain undefeated with a 3-0-1 record.

Western took the lead immediately in this contest when Amanda Boyle found the back of the net in the first minute of play, her third goal of the season.  More details.

The Lions also suffered a 3-0 loss at the hands of the University of Guelph Gryphons on Saturday afternoon in Guelph, Ont. Slippery conditions due to the rain slowed the pace early on, but Guelph’s Erica Bain managed to sneak two goals past Lions goalkeeper Sarah Fiorini in the 24th and 34th minutes to give the Gryphons a 2-0 lead at the half. Fiorini finished the game with seven saves on 10 shots.  More details.