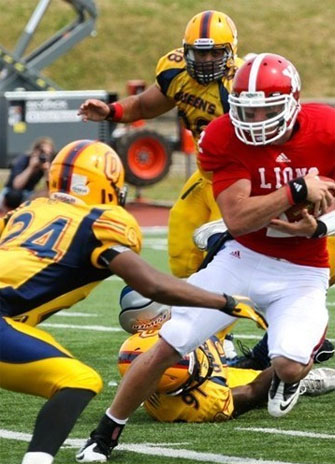 The York University Lions football team will unveil its new turf field on Saturday when it plays host to the Wilfrid Laurier University Golden Hawks in the annual Frosh Frenzy game.

Presented by YU-Card, the game kickoff is set for 1pm at York Stadium and can also be seen live online on LionsTV. The atmosphere promises to be exciting as thousands of first-year York students will be in attendance to watch the Lions at their first-ever home football game. In addition, the first 500 fans in attendance will receive free Lions-branded sunglasses.

Both squads are looking to get into the win column for the first time this season. The Lions started the year on Aug. 25 with a 52-1 loss to the No. 2 nationally ranked Queen’s University Gaels and did not play last week as the squad had its bye.

The Golden Hawks are currently 0-2 on the season following a 21-7 loss to the No. 7 University of Guelph Gryphons in week one of the season, and a 27-20 defeat at the hands of the University of Toronto Varsity Blues on Labour Day.

The Lions came close to upsetting the Golden Hawks during week three last year in a thrilling game that came down to the final drive. Laurier jumped out to a 17-0 lead and led 17-3 at the half, but the Lions came all the way back to take a 20-17 lead late in the fourth quarter. But victory was not to be as Laurier scored the winning touchdown with 1:11 left on the clock for the four-point win.

The Lions’ roster now has many players with Canadian Interuniversity Sport (CIS) experience under their belts, but overall the roster remains young with just six players in their fourth and fifth years of eligibility. The squad will look for one of them, starting quarterback Myles Gibbon, to return to the form that saw him finish third in the Ontario University Athletics (OUA) league in passing yards last season. He got off to a slow start in the opener – 100 yards on 10-of-19, and an additional 54 yards on the ground – but proved last year he can be a game changer on offence.

Week one Lions defensive leaders were lineman James Tuck and defensive back Cory Bellerdine, both had 4.5 tackles against Queen’s. The defence will also get a big boost this week with the return of key players including linebackers Hussein Hazime and Jevon Wisdom, and defensive end Micheal Livingston. All three of them missed the opener but are ready to go for this week.

Like the Lions, the Wilfrid Laurier roster is young. The team kept the game against the Gryphons close despite collecting just 71 yards of offence, and was much better the following week with more than 400 yards against the Varsity Blues. In that contest, the Golden Hawks let the Blues take a big lead after three quarters – 27-10 – before mounting a comeback that fell one touchdown short.

Second-year Golden Hawks receiver Gregory Nyhof had his first career 100-yard receiving game against Toronto, accumulating 113 yards on six catches and a touchdown. Laurier rookie quarterback Julien John also had a big game, going 25-for-49 for 345 yards, with two touchdowns and one interception.

Saturday’s game also marks the return of Laurier head coach Michael Faulds, who was York’s offensive coordinator for three seasons before taking over the Golden Hawks in December.

The game is free for all York University students. Adult tickets are $10; non-York students, seniors over 55 years of age, York alumni and staff are $7; and youth under 13 are admitted free to the game. Tickets can be purchased at the gate on game day.