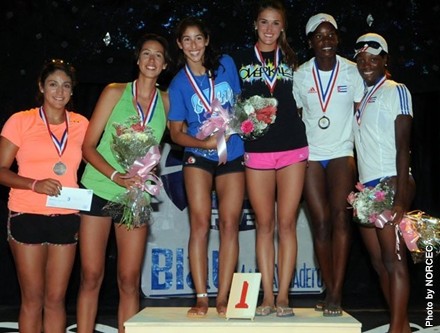 The Canadian duo faced strong resistance from the Cuban tandem of Lianma Flores and Leila Martinez in the final, but relied on their finesse and good defence to win 2-1 (29-31, 21-18, 15-12) in the longest match of the competition that lasted one hour and 14 minutes.

Earlier in the day, they advanced to the final with a dominating 21-18, 21-16 victory over the experienced Mexican pair of Martha Revuelta and Bibiana Candelas, who went on to with the bronze medal.

“We are very happy to win this match against a very strong team,” Humana-Paredes said in an interview with Cubavision TV. “The weather was very hot during the weekend but we were able to adjust and played well.”

The result was the duo’s second international medal of the summer as Humana-Paredes and Pischke, who competed in the Canadian Interuniversity Sport (CIS) league for the University of Manitoba, won the bronze medal at the under-23 world championships in Myslowice, Poland, in June.

They weren’t the only beach volleyball players competing at a big event this past weekend, as many current and former members of the Lions were in Vancouver for the Canadian beach volleyball championships.

Brandie Wilkerson, a fourth-year outside hitter for the Lions, finished in fifth place in the women’s senior one division alongside partner Claudia Seguin after a second-place result in pool A during the preliminary round.

Incoming recruit Sven Trodel was impressive in the men’s under-21 division, winning the bronze medal with partner Will Hoey, while fellow recruit Aleks Arsovic and current Lion Kirsten Dillon were both defeated in the quarter-finals in the women’s under-21 category.

Finally, Lions men’s volleyball assistant coach Cam Wheelan won the gold medal in the men’s senior one division with partner Mike Plantinga. The duo went undefeated at the tournament, winning all three preliminary-round games and then each elimination contest to finish in first place.