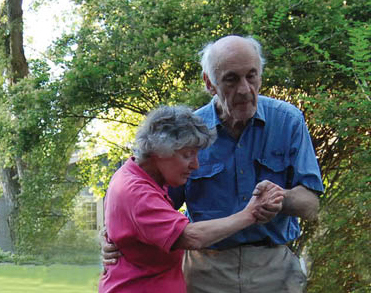 He came to York University in 1966 with the intention of building a concentration of people interested in vision. Prof. Howard was promoted to full professor in 1967 and was chair of the Department of Psychology, from 1968 to 1971. During that time he recruited several visual scientists and continued to be influential in attracting more to form the York Vision Group. The group became an official York Research Unit under the title the Centre for Vision Research in 1992. In 1988, together with David Martin Regan, Prof. Howard founded the Human Performance Laboratory of the Institute for Space and Terrestrial Sciences. This was an Ontario Centre of Excellence with its headquarters at York University. It was later renamed the Centre for Research in Earth and Space Technologies (CRESTech).

Professor Howard with his wife Toni

Prof. Howard’s initial research, starting in the late 1950s, investigated perceptual ambiguity, visual-motor co-ordination and eye movements. When he came to York, he researched several aspects of spatial orientation, including vection, induced motion and torsional and vergence eye movements. He retired from his teaching appointment at York University in 1993 to become a senior scientist with CRESTech when he became interested in stereoscopic vision. He continued to work on human spatial orientation, sponsored by grants from NASA, the Canadian Space Agency, and the Defence and Civil Institute of Environmental Medicine (DCIEM).

He leaves an impressive legacy of original scientific discoveries, as well as several highly influential books, including Human Visual Orientation (1982), Binocular Vision and Stereopsis (1995 with Brian Rogers), Seeing in Depth (2002, 2 volumes, with Brian Rogers) and most recently Perceiving in Depth (2012, 3 volumes, with Brian Rogers). The Centre for Vision Research hosted a Festshrift for him in 2001 the proceedings of which were published as Levels of Perception (2002), edited by York psychology Professor Laurence Harris, director of the Centre for Vision Research, and Professor Michael Jenkin of York’s Lassonde School of Engineering.

He is survived by his wife, Toni, his three children and seven grandchildren.