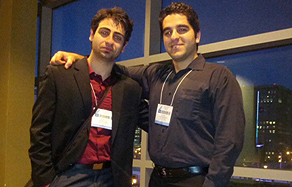 components-research interest section poster competition had a record 95 posters submitted by undergraduate and graduate students, as well as postdoctoral Fellows.

“It felt somewhat surreal at first given that experimental biology is such a huge and prestigious event with people from all over the world participating. Given the nature of research – long hours, trials and errors, hypothesis creation and revision – it was very nice to receive an accolade that reflects the hard work that research entails,” says Shahsavar. “Most of all, I felt truly honored to have my research recognized and I hope that it will inspire others to further contribute to the growing integrative field of nutrition and neuroscience.”

Taheri-Shalmani and Shahsavar, both fourth-year students working under the supervision of Professor Mazen Hamadeh of the School of Kinesiology & Health Science in the Faculty of Health, presented their latest research

The students had been working on analyzing muscle samples collected from a large study investigating the effect of either vitamin D supplementation at very high levels (Taheri-Shalmani’s project) or vitamin D deficiency (Shahsavar’s project) in amyotrophic lateral sclerosis (ALS), commonly known as Lou Gehrig’s disease. They analyzed the quadriceps muscle for makers of calcium trafficking, endoplasmic reticulum stress and cell death (apoptosis). Dysfunction in calcium trafficking and endoplasmic reticulum stress is but one of the several mechanisms that lead to cell death in ALS.

“The allure of using Vitamin D as an intervention stems from the fact that it is simply a vitamin that can be obtained with simply adequate sun exposure (although, given that we do not receive much of it in Canada, we have to rely on fortified foods and supplements) as opposed to other interventions involving highly synthesized pharmaceutical drugs. By demonstrating how it hastens disease progression, my research was able to further illustrate vitamin D’s integral role in the pathophysiology of the disease ALS,” says Shahsavar.

ALS is a progressive neurodegenerative disease that affects nerve cells in the brain and the spinal cord that control muscles.

“Their work follows on the heels of our previous observations of the effects of vitamin D supplementation at very high levels and vitamin D deficiency on anthropometric and functional outcome measures, as well as disease onset, disease progression and life span,” says Hamadeh.

Their research began in earnest when they started work in Hamadeh’s lab in May 2012 for their first Natural Sciences & Engineering Research Council of Canada Undergraduate Student Research Award. They were instructed to conduct comprehensive research on ALS. As they grew more comfortable with the material, they looked for new pathways that have been implicated in the disease and came up with the idea of endoplasmic reticulum stress from scratch, and wanted to see how this part of ALS can be affected by vitamin D.

“It is their first international conference and their first poster competition. This win attests to their hard work in analyzing the samples, their well-rounded and thorough knowledge about the topic, and their excellent presentation skills,” says Hamadeh.