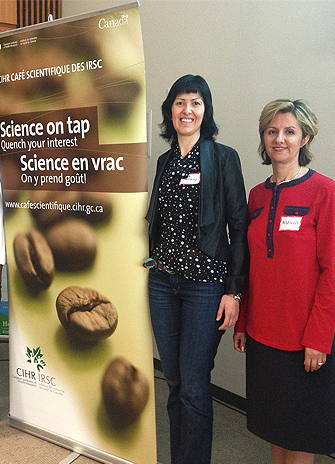 In Canada, more than 202,000 (or 3.7 per cent) of children under the age of 15 have one or more disabilities, with 96 per cent of their care provided by their mothers. Just what kind of barriers do these mothers face, especially as immigrants? What works and what doesn’t when raising a child with disabilities in Toronto?

That was the focus of a recent Café Scientifique – Mothers Speak Up! On Parenting Children with Disabilities: Implications for Mom’s Wellbeing and Social Support, sponsored by the Canadian Institutes of Health Research’s Institute of Gender

and Health at the Holland Bloorview Kids Rehabilitation Hospital. It was also where York nursing Professor Nazilla Khanlou, principal investigator of the Mothers Project, presented the preliminary findings of her team’s research.

The Echo Chair in Women’s Mental Health Research in York’s Faculty of Health Khanlou shared the project’s research summary, Voices of Immigrant Mothers of Children with Disabilities: Availability and Use of Social Support, with more than 50 mothers, service providers, family advocates, students and researchers. The full report is expected to be ready this summer.

Khanlou opened the café by reading a letter of greeting from the Minister of Children & Youth Services Teresa Piruzza, followed by an overview of the Mothers Project, a panel discussion and an open forum where participants could share their own stories. Mother after mother did just that.

The goal of the Mothers Project, says Khanlou, is to understand the perceptions of social support among immigrant mothers of children with disabilities and to inform services and social support for these mothers. It is important that policy makers and planners know that coordinated service and care for these mothers is needed, says Khanlou. As part of the research, interviews were conducted with 30 immigrant mothers of children with disabilities and 27 service providers, mainly from the Greater Toronto Area.

The findings point to several barriers to service, including language, financial, availability and accessibility, coupled with long wait times, transportation, isolation and discrimination, as well as disjointed and dispersed services. “It is disheartening to learn that these barriers have not changed much over the years,” says Khanlou. When information and services were coordinated and available under the same roof, however, mothers spoke of the ease of accessing them.

The panel discussed many of the same barriers that arose in the research, derived either from personal experience or from what mothers told them in the course of their work. The panellists were: Sheila Jennings (MA ’11), a lawyer, PhD candidate at York’s Osgoode Hall Law School and the Mothers Project coordinator; Gail Jones, director of community support at Kerry’s Place Autism Services; Yana Skybin, a YMCA settlement counsellor in Barrie; Sharon Smith, originally from Trinidad and a mother of three adult children; and Charmaine Williams, associate dean, academic, at the University of Toronto. For bios, click here.

Jennings told café participants that women sometimes felt they faced conflicting information from both their country of origin and Canada about what documentation was needed, and this hindered their access to services. Some mothers also said government-run ESL programs that enforced strict attendance policies made learning English difficult, as they often needed to be absent from class to attend to their disabled child.

“Such a policy is a barrier for immigrant mothers to employment, ultimately,” says Jennings. “A question that arises for me is whether ESL programs adequately accommodate immigrant mothers with children with disabilities, and if not, what can be done to change that.”

Several women said they are “disabled by proxy”, as they face isolation from other mothers because of societal uncertainty about how to communicate about disability. Participants and panellists also described accessing government service as one of their most difficult barriers. “I’m a social worker and I’m supposed to know how to get through the bureaucratic processes, and I don’t know,” said Williams.

Discrimination based on the degree of disability, language skills or cultural, is another issue for these mothers, says Smith. Skybin agreed, saying, “If you even have a bit of an accent, they treat you as if you have a disability yourself or are uneducated. It isn’t an equal conversation.” Jones said the system isn’t made for those whose first language is neither English nor French. “As service providers, we need to do better,” said Jones. “We need to have staff education so that we are more aware of cultural differences and nuances.”

Difficulties extended to medical services. Skybin said she had difficulty finding a doctor to perform the appropriate tests when one of her children showed signs of developmental delay. The doctor told her, “He’s fine. You just need to learn to parent better.”

Skybin also described how cultural differences played a role. She said she would go to her children’s school and question the teachers in a very direct way typical to her in Ukraine. “I’m not there to chat. I’m there to talk about my child.” But this made others less likely to help as her directness rubbed them the wrong way. She didn’t understand what was expected culturally in Canada, though she thinks it shouldn’t have been a barrier to service in a multicultural country.

“The school system is a one of the areas where parents feel their children don’t get the support they need,” says Khanlou.

For more information, see the preliminary findings of the Mothers Project or visit Nazilla Khanlou’s website.