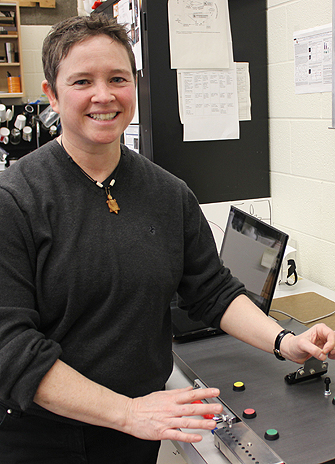 Everyone from young sports players to construction workers may be at risk of being declared fit for regular duties too soon after having a concussion because no one tests their cognitive and mobility skills together, says York kinesiology Professor Lauren Sergio.

They could be at heightened risk of re-injuring themselves or others, says Sergio, who recently received a $472,549 Canadian Institutes of Health Research (CHIR) operating grant over five years.

The grant is to study the effects of thinking and moving simultaneously in people who have had a concussion or are at risk for dementia through early signs of cognitive decline or family history. Sergio is working with York kinesiology Professor Alison Macpherson, the study’s co-investigator, and a team of graduate students, including Kara Hawkins.

Sergio was intrigued by the results of her recent pilot study in which there was a surprising breakdown in communication between two parts of the brain – the parietal lobe, which controls

spatial orientation, and the frontal lobe, which controls planning, judgment and certain types of movement – in people who have had a concussion or a family history of dementia.

But current clinical tests are not picking this up, she says. “What we’re finding right now is that current clinical exams, either post-concussion or pre-dementia, even early dementia, will test basic motor skills – and, actually, those tend to be not so bad – and then they will test thinking. But they are always tested separately.”

Since the separate tests will seem fine, these asymptomatic, post-concussion sports players are being allowed back onto the hockey ice or the football field, or a construction worker is being cleared to operate machinery. But what Sergio and her team are discovering is contrary to current tests; these people may not be ready to resume sports or work, and there may be a risk of further injury to themselves or others.

“We are finding there is a huge effect of combining the two – thinking and moving – and testing them together. As soon as you have them moving and they have to think at the same time, their performance just drops off,” says Sergio of the School of Kinesiology & Health Science in the Faculty of Health.

That’s a problem for a young hockey player who has to be aware of who is coming up beside him while skating, puck handling, trying to remember what the coach told him and trying to take a shot on net or pass the puck. The problem is compounded in young people as they are more likely to act first and think later. In tests, Sergio has found as people get older they start to prioritize thinking over moving, but younger people start moving first.

She gives the example of walking beside someone and asking them a question – an older person is more likely to stop walking while they think about the answer.

By testing the thinking and moving together, Sergio says, “I can tell if you’ve had a concussion, whether or not you’re showing by current standards. So even though you report your day as asymptomatic and you’re passing all the tests, our test

is picking up on the fact you’ve had a concussion.” Her test looks at things like the ability to move your finger to the left on a computer screen to make the cursor move right to connect with a dot that has popped up on the screen.

What was really surprising, she says, is that people with a family history of dementia were also showing difficulties when they were asked to perform certain cognitive and mobility tasks. In the pilot study, these were middle-aged people bringing their older parents in for dementia testing. Hawkins, a PhD student under Sergio, had asked the waiting adult children, who reported no symptoms but had a family history of the disease, to complete a few simple tasks.

“One hundred per cent of them so far are doing terrible on our tasks,” says Sergio. “Basically, our task can tell if you have a family history or some risk of dementia, even if nothing has shown up.”

Through the CIHR grant, Sergio plans to first develop her team’s previous research into a validated, clinically feasible cognitive-motor assessment tool to detect dementia early on. She will also examine whether the assessment tool can predict who will progress to dementia.

She hopes her research will provide a basic understanding of how the brain processes rule-based information to make accurate movements – such as moving a computer mouse – and provide tools to assess if these brain processes have degraded because of dementia or brain injury. She will also use an fMRI to take images of each participant’s brain.

The purpose is to come up with a way of testing for signs of dementia earlier and to ensure that people aren’t being sent out to play or work too soon after suffering a concussion.