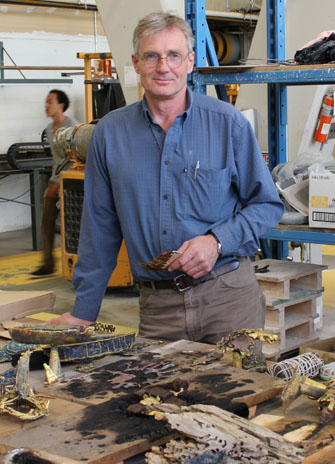 /* Style Definitions */
table.MsoNormalTable
{mso-style-name:”Table Normal”;
mso-tstyle-rowband-size:0;
mso-tstyle-colband-size:0;
mso-style-noshow:yes;
mso-style-priority:99;
mso-style-parent:””;
mso-padding-alt:0in 5.4pt 0in 5.4pt;
mso-para-margin-top:0in;
mso-para-margin-right:0in;
mso-para-margin-bottom:10.0pt;
mso-para-margin-left:0in;
line-height:115%;
mso-pagination:widow-orphan;
font-size:11.0pt;
font-family:”Calibri”,”sans-serif”;
mso-ascii-font-family:Calibri;
mso-ascii-theme-font:minor-latin;
mso-hansi-font-family:Calibri;
mso-hansi-theme-font:minor-latin;}
Internationally recognized environmental artist Peter von Tiesenhausen is the 2013 Louis Odette Sculptor-in-Residence in the Faculty of Fine Arts at York University. He will give a public talk about his work as part of his residency, which runs May 6 to 31 in conjunction with the Intensive Sculpture Workshop, a fourth-year course offered by the Department of Visual Art & Art History.

Peter von Tiesenhausen with a collection of works he started in the solar foundry and will continue to develop in the residency, alongside other projects

During his residency, von Tiesenhausen will give hands-on demonstrations of his artistic process, contributing to the education of student artists while completing his own major sculpture project in York’s L.L. Odette Centre for Sculpture. Twenty upper-level undergraduate students are working with him as artist’s apprentices.

Von Tiesenhausen has exhibited and lectured widely across Canada as well as in Europe, the US and Mexico, and his works are found in many public and private collections. He has also created several ephemeral and permanent public art works, including “Full Circle”, a sculpture installed on the corner of Queen and Victoria Streets in Toronto, comprising five iron figures cast from wood originals that were carved and blackened in a fire on the Canadian prairie.

Von Tiesenhausen’s multi-disciplinary practice is deeply informed by his formative years in remote northern Alberta and the atypical career path he took from studying art in college to heavy construction, resource exploration and gold mining in the Klondike before becoming a full-time practicing artist in 1990. These experiences, as well as his travels on six continents including the Antarctic, have given him insight into the necessity of pursuing a sustainable future – a common theme in his work.

Von Tiesenhausen’s painting, sculpture, drawing, printmaking, installation, event, video and performance works often involve the community in which he is working and utilize renewable or reclaimed materials found there. He was a driving force in the construction of the sustainable, timber-frame, straw-bale community centre in the rural community of Demmitt, Alberta, where he grew up, and most recently was involved in a metal-forging and casting project at a solar-powered foundry in Lunenburg, Nova Scotia. The land where he lives (over which he claimed copyright in 1995) constitutes one of his primary and ongoing artworks.

“Given von Tiesenhausen’s responsiveness to the environment in which he works, it will be interesting to see what his York residency inspires,” said Professor Kevin Yates, coordinator of the residency and workshop course. “He’ll be working with bronze casting, and certainly our students are excited to fire up the foundry and work with him.”

Von Tiesenhausen will discuss his creative practice and philosophy in an informal presentation on Thursday, May 16 at 2pm in Room 130, Joan & Martin Goldfarb Centre for Fine Arts at York. In this free talk titled “Concentrations”, he will speak about his search for meaning through sculpture, installation and performance, and his attempts at honing art, life and community. The talk is open to the public and everyone is welcome.

The Louis Odette Sculptor-in-Residence program launched in York University’s Faculty of Fine Arts in 2000. The program strives to create a dynamic learning environment which supports the advancement of the art of sculpture, and where students benefit from participation in and observation of a range of professional studio practices. The residency provides the opportunity for upper-level undergraduate visual arts students to develop an enhanced working understanding of sculpture techniques from the perspective of eminent guest artists. Previous guests of the program include BGL (2012) Justin Novak and Brendan Lee Satish Tang (2011), James Carl (2006), William Tucker (2005), Claire Brunet (2003) and Liz Magor (2000).

The Louis Odette Sculptor-in-Residence program is made possible with the support of the P. & L. Odette Charitable Foundation.