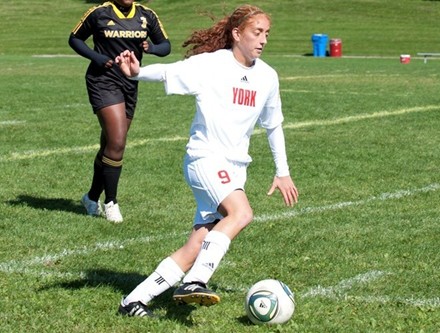 The event honours female student-athletes who have excelled in their chosen sports and fields of study. This year’s guest speaker will be Diana Matheson, a member of the Canadian national women’s soccer team who is best known for scoring the winning goal in the bronze-medal game at the 2012 Summer Olympics in London.

Turone, a fifth-year defender, has been a leader for the Lions in her five years as a member of the women’s soccer team.

She has been a regular starter on defence for the past three seasons and was the team captain in each of the last two. As the anchor of the back end she was key to helping the Lions allow just 18 goals in 30 regular-season games over the last two seasons, the lowest mark in the OUA West Division. She was recognized for her efforts by earning back-to-back OUA all-star honours, including a place on the first team in 2012.

Turone capped off her career at York by earning the Bryce M. Taylor Award, which is the highest attainable award given by York Sport & Recreation and is presented to a graduating female student who has, throughout the undergraduate years, made outstanding contributions to sport at York through leadership, dedication, enthusiasm and participation. She is also very involved in the Lions community as a member of the sport council, and won the York Sport Council award this past season.

In addition to her successes on the pitch, Turone has excelled in the classroom and earned CIS academic all-Canadian honours for the first time in 2012. She was also the recipient of York University’s Stuart G. Robbins Award, which is given to the student-athlete with the highest grade point average among sport excellence award winners.

She is also a dedicated volunteer within both the York and local communities. As a member of the York Sport Council she has been involved in multiple charity fundraisers for SickKids Hospital and several food drives. For the past five years she has gone back to her high school to help coach the girls’ volleyball and soccer teams, and she has also run soccer clinics for the Vaughan Soccer Club.

Through the education program at York, Turone has spent time working with autistic children at a local elementary school, with the aim of helping the children develop their motor skills through play. She also spent Saturday mornings tutoring young children at York Woods Toronto Public Library and, through teaching placements was involved in extra-curricular activities such as coaching soccer and assisting with the school’s athletic council.

Turone and the rest of the selections from across the OUA will be honoured at a luncheon on Tuesday, May 7 at the Taboo Resort in Gravenhurst, Ont.