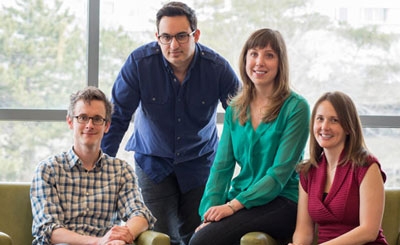 After a very competitive process, Osgoode Juris Doctor (JD) law students have secured an impressive array of judicial clerkships around the country.

Four Osgoode students were selected for clerkships at the Supreme Court of Canada for 2014-2015. Lara Kinkartz will clerk for Justice Michael Moldaver, Ian McKellar for Justice Andromache Karakatsanis, Geneviève Murray will clerk for Justice Richard Wagner and Fahad Siddiqui will clerk for Justice Rosalie Silberman Abella. They will begin their one-year clerkships in September 2014. The four students join a long list of Osgoode graduates who have clerked with Canada’s highest court. Currently, Chanakya Sethi (JD ’12) is serving as law clerk to Moldaver, Charles Moulins (JD ’12) is clerking for Chief Justice Beverley McLachlin, and Kenneth Grad (JD ’10) is clerking for Justice Morris Fish. Samara Secter, who will graduate this spring, starts her clerkship this September with Justice Louis LeBel.

“I am proud of the talented and diverse group of Osgoode students who applied to all levels of courts across the country, and am happy to know that the judiciary learned of their remarkable qualities and achievements,” said Osgoode Dean Lorne Sossin in announcing the successful clerkship candidates to the Osgoode community. He added that he looks forward to announcing other successful clerkship candidates as they come to his attention.