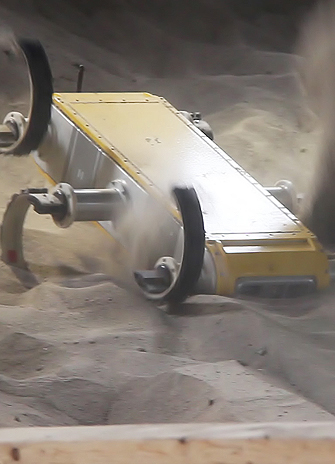 We’ve seen AQUA before — the little amphibious robot with flippers that can swim underwater. Developed by York and McGill researchers, it became the darling of international science press two years ago when it was tested in sparkling

blue Caribbean waters. At a demonstration of robots Monday, AQUA shed its flippers for six land-hugging, rubber-treaded, semi-circular legs to climb sand banks and gravel mounds at the University of Toronto’s Mars Dome.

Observers cheered as AQUA churned up clouds of sand like a burrowing beetle trying mightily to reach the top. It was doing tricks for the media after a weekend of robotic field trials at Keele campus and the Mars Dome.

AQUA was developed by Professors Michael Jenkin (York) and Gregory Dudek (McGill) and is now available as a commercial product through Independent Robotics, a successful university spin-off company.

Jenkin and Dudek played host to researchers from eight universities and 14 partner organizations to test and compare their air, land and water robots last weekend at the first annual robotic field trials (see photos) sponsored  by NSERC Canadian Field Robotics Network (NCFRN) at York and the U of T Institute of Aerospace Studies (UTIAS).

“These organizations, and the specific representatives, constitute the cream of the crop in terms of Canadian researchers and developers doing outdoor robotics,” said Dudek, who is also NCFRN scientific director.

“The vehicles they will be using at the field trials span ones that walk, fly and swim, and the scientific and technical leadership will be among the best in the world.”

At the field trials, researchers and their industrial partners could compare platforms and applications, and network. “It’s a catalyst” for new ideas and an opportunity for new synergies, said Dudek.

At the Mars Dome, robots were sent on sample-return missions over a mock planetary landscape. Their goal was to seek out certain rocks, image them and return to their starting locations. The robots ranged from the

celebrity Juno rover, the Canadian Space Agency’s state of the art six-wheeler souped up with cameras and sensors, to the miniature AQUA.

At Keele campus, air, land and water robots were sent on environmental monitoring missions over, on and around Stong Pond.

“You can send an autonomous robot to do the inspections and monitoring to places that are dangerous, difficult, remote and boring,” says Michael Jenkin, York computer science and engineering professor. Robots can be cheaper, faster and safer

than sending in a person.

In the not-to-distant future, predicts Jenkin, robots could be deployed instead of humans to monitor and inspect Canada’s extensive coastlines, oil and gas pipelines, Hydro corridors and commercial waterways. They could be sent deep into underground mines to identify resources. They could survey borders, assess chemical spills, nuclear accidents and other environmental disasters, scout dangerous crime scenes and be used for search-and-rescue missions.

Dozens of PhD students and researchers used laptops and smartphones to maneuver and collect information from robots. “This only works because students do the work,” said Jenkin.

Most of the robot prototypes tested during the field trials are built from general-purpose platforms — all-terrain vehicles manufactured by Bombardier Recreational Products, for instance — mounted with cameras, sensors and other data-harvesting devices. The field trials were also a chance for industries like MacDonald Dettwiler Space and Advanced Robotics Ltd. (MDA) and Clearpath Robotics to showcase their products.

EDDY and the Minnows form a fleet of water-surface robots being developed to monitor coasts and waterways, and measure damage from floods and environmental disasters such as chemical spills. Eddy is built on a yellow base from Clearpath Robotics and fitted with GPS and other sensors. It can get to within two metres of the shore and can be programmed to move in repetitive patterns across the water. Minnows can get closer to shore and can relay information back to Eddy which can relay it in turn to a tele-operator on shore.

Both can be operated in any weather.

From left, Ryan Gariepy of Clearpath Robotics with Gregory Dudek of McGill and Michael Jenkin of York seated on a Grizzly in front of a new robot pavillion

Eddy was developed by York’s Michael Jenkin and John Tsotsos, and McGill’s Greg Dudek with funding from the Canadian Foundation for Innovation. They are programming Eddy to communicate with flying robots, which could do surveillance from above.

York has two Grizzly robots. Built on platform from Clearpath Robotics, they are being developed to monitor and inspect oil and gas pipelines.

Just in time for the field trials, York installed two new robot pavillions near Stong Pond and the Shoreham and Pond Road intersection. Funded by the Canada Foundation for Innovation, they are designed as secure storage space for robots being tested in the field and a place to recharge batteries and can also double as people shelters and picnic spaces.

John Tsotsos, distinguished research professor in computer science & engineering, demonstrates the challenges of programming an autonomous mobile robot — like the three-wheel standing robot here or a wheelchair — to recognize and avoid obstacles. “Good visual perception is a stumbling block for robotics,” he says. “The way to build better vision systems for robots is to have a better understanding of human vision.”