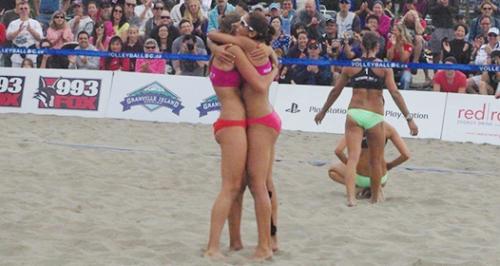 Humana-Paredes and Pischke the defending Canadian national champions, went undefeated in five matches and never gave up more than 15 points in any set. The duo dominated the final, knocking off the pairing of Kaila Seguin and Kristina Vlcek, a former member of the Lions, 21-13, 21-9 to earn the Canadian berth at the World University Games.

Humana-Paredes is one of the best left side hitters in the OUA and this season was named an OUA first-team all-star for the second straight year. Last season she won York’s female athlete of the year award after her first OUA all-star honour and a spot on the CIS all-Canadian team for the first time.

Teammate Brandie Wilkerson also competed at the trials and reached the semifinals along with partner Claudia Seguin (Ottawa). Wilkerson has earned OUA first-team all-star and CIS second-team all-Canadian honours in each of the last two seasons.

York will also be represented in the men’s draw by Grant O’Gorman, a first-year student at the University who spent the first half of the past season with the Lions men’s volleyball team before deciding to dedicate his training fully to beach volleyball.

O’Gorman and partner Sam Pedlow dominated the trials event, going undefeated and allowing 12 points or fewer in each of the five matches played. They capped off the run with a 21-9, 21-11 win over Greg Simone and Gabriel Burlacu in the championship match.

The 27th FISU Summer Universiade will take place July 6 to17.