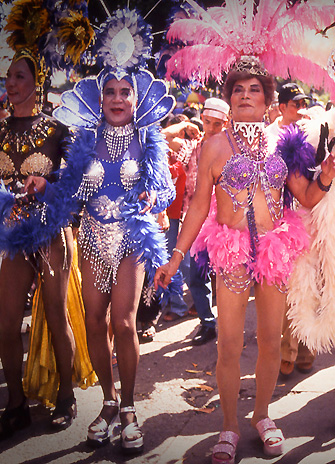 you judge a film by its publicity poster, you’ll certainly be intrigued by one that features an 80-year-old man wearing a feather boa – not to mention sequins and a pink skirt – dancing in a parade.

“He passed away a few years ago but he was in his early 80s when he did that. Can you imagine? He danced for three days in that costume!” said Patrick Alcedo, professor in the Department of Dance at York University.

The gentleman in the pink feather boa was participating in the Ati-atihan Festival, held annually in mid-January in Alcedo’s hometown, Kalibo, the capital of Aklan province in the Philippines. The festival is also celebrated in diasporic locales, such as Toronto and Vancouver, where Filipinos from Kalibo have emigrated.

Ati-atihan, a hybrid and layered performance of pre-colonial and colonial traditions, as well as the carnivalesque and the modern, which come together under one banner in a simultaneous celebration of the Santo Niño (Spanish for Holy Child) and the indigenous Ati people.

While some journalists have described the festival as the Mardi Gras of the Philippines, Ati-atihan is distinct and highly complex, said Alcedo. Aside from being an opportunity for participants to dance in the streets and to attract tourists to the town, it’s a religious celebration as well as an honour and a gesture back to pre-colonial Philippines through the Aboriginal population.

Alcedo, a dance ethnographer, has made a documentary film about the festival. His production, Ati-atihan Lives, will be screened at York University in the McLean Performance Studio in Accolade East Building on March 17 at 2pm and March 19 at 4pm.

The idea to focus his research on the Ati-atihan Festival began with Alcedo’s need to understand his own culture. The footage for the documentary was initially shot for Alcedo’s own documenting purposes during research for his PhD dissertation. It soon became clear that the film recording added a whole new dimension to the festival.

“It was not totally different, but it articulated different emotions – things that I could not have captured through writing,” said Alcedo.

“While the characters that viewers encounter in the film come from very different gender, sexual and economic backgrounds, the festival brings them together,” Alcedo said. “It allows for a group, but also for difference, to be foregrounded and understood through performance … It’s a kind of festival that actually values difference and it’s a difference that people perform.”

Despite the fact that the Catholic Church and regional authorities maintain a certain amount of control over the Ati-atihan Festival management and structure, there is also a space for what Alcedo describes as temporal and spatial “inversion [which] happens through or on the body, or even within the body.”

Alcedo stresses the importance of remaining conscious of his ongoing relationship with the community and giving back to them when possible. Those attending the screenings of his film are invited to make a $5 donation, which will go towards a scholarship fund for the elementary education of indigenous Ati children in Kalibo.

Alcedo is the recipient of the Young Professional Award for his outstanding contribution to the Filipino-Canadian community, awarded by Filipino Centre of Toronto. He currently holds a research/creation grant from the Social Sciences & Humanities Research Council of Canada (SSHRC) for his work on performance, immigrant identities and emotional labour among Filipino caregivers in Toronto.

Ati-atihan is a hybrid and layered performance of pre-colonial and colonial traditions, as well as the carnivalesque and the modern

Another result of his SSHRC-funded research will be another documentary film, A Piece of Paradise, about the transnational lives of Filipino caregivers in Toronto. A preview will be shown at the screenings of Ati-atihan Lives.

The film presentations are co-sponsored by the Department of Dance at York University and the York Centre for Asian Research (YCAR). They are part of YCAR’s Diversity, Rights and Religion in Asia series, which convenes a discussion on issues of cultural, gender and religious diversity, and the rights of minority groups, which are prevalent concerns in many Asian societies and among Asian ethnic communities around the world.

For more information, visit the YCAR website or e-mail ycar@yorku.ca.