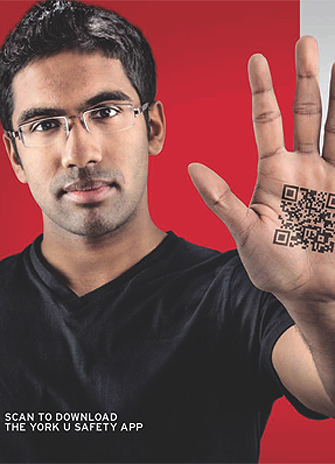 The Safer Together campaign has rolled out a series of informative posters appearing in different formats around the Keele campus:  as wall posters, ads in the University’s shuttles, in virtual format on homepage banners and on the campus network of LCD emergency screens. The campaign encourages all members of the York community to take the time to learn more about the many safety resources on campus.

The campaign features the faces of students, staff and faculty.  Each poster has a targeted message about topics such as harassment, hate speech, sexual assault support resources, and personal safety. The campus resources featured in the campaign are:

In addition, each poster has a QR code (right) that facilitates downloading the University’s new York U Safety app for smartphones and starting next week, the REDI tutorial.

The concept was developed by the Community Safety Council in partnership with the Office of the Vice-President, Finance and Administration and the Communications & Public Affairs Division.