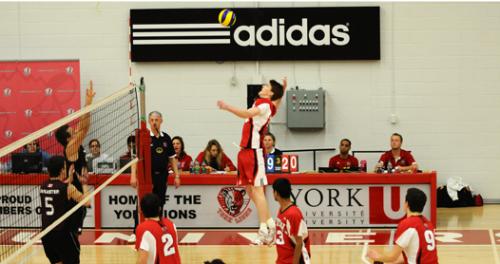 The York University Lions men’s volleyball team faced a tough opponent in the No. 2 nationally ranked McMaster University Marauders on Sunday, ultimately upsetting the top team in the Ontario University Athletics (OUA) league in straight sets by scores of 25-19, 25-23, and 25-21.

The Marauders came into the match with a perfect 17-0 mark on the year, but the Lions handed them their first loss in the regular-season finale for both teams. The win improves the Lions’ record to 10-8, a two-win improvement over last season and they finish fifth in the OUA standings. McMaster had already claimed top spot.

The Lions leapt to an early lead in the first set and never looked back, repeatedly frustrating the Marauders attackers with stiff blocks up the middle as the Lions cruised to a 25-19 first set victory.  More details on the York Lions website.

The York University Lions men’s basketball team was victorious on Saturday night, downing the Queen’s University Gaels by a final score of 90-84 at the Tait McKenzie Centre. Lions fifth-year point guard David Tyndale turned in a complete performance on his senior night, scoring 21 points and dishing out 11 assists for a massive double-double to lead his team to the win.

The first quarter saw both teams eager to get up and down the court and after just three minutes of play the Gaels owned a 14-10 lead. However, shortly thereafter a difficult fade away three by Tyndale gave York a 15-14 lead.  More details.

The York University Lions women’s basketball team coasted to a 77-64 victory over the Queen’s University Gaels on Saturday night at the Tait McKenzie Centre. Lions guard Ishanaa Seupersadsingh connected on all four of her three-pointers in the second quarter and the Lions held onto a 26-point halftime lead for the big win.

Points were hard to come by in the opening stages of the game as both teams played tight man-to-man defence. With the game tied at six, the Lions capitalized on great ball movement by nailing a couple of wide open threes to give them a 14-8 lead.

The Gaels would respond by scoring on a couple of uncontested shots of their own, but point guard Kayla Pangos made a layup at the buzzer to give York a 20-15 lead after one quarter.  More details.

After surrendering two of the first three sets, the York University Lions women’s volleyball team rallied back to defeat the McMaster University Marauders 3-2 in their regular-season finale on Sunday afternoon at the Tait McKenzie Centre.

Down 2-1 in the match, the Lions dominated early in the crucial fourth set, starting with a four-point run that saw three consecutive service aces from Melissa Humana-Paredes. The Lions established a commanding lead early, as high as 14-3, en route to a 25-15 victory to force the all-important fifth and final set, in which the Lions stifled a late Marauders rally to take the set 15-11.

The Marauders opened with a strong first set, surging for a 25-22 victory, before the Lions rallied in the second. On the back of a seven-point streak, the Lions cruised to a 25-21 win that featured sneaky tips from setter Tisha Rouse as well as Humana-Paredes.  More details.

The York University Lions women’s hockey team earned an upset victory over the visiting University of Windsor Lancers on Saturday afternoon, finishing with a 2-1 shootout win at Canlan Ice Sports.

Chloe Milano scored first in the shootout, undressing Lancers’ goalie Karlyle Robinson with an impressive stick deke and firing the puck high into the open top shelf. Lisa Stathopulos followed up by beating the goalie with a quick snap shot low to the blocker side.  More details.

The following day, the Lions ended their season by dropping a narrow 3-2 decision to the No. 10 nationally-ranked Western University Mustangs.

The Lions held a slim 2-1 lead going into the third, but the Mustangs completed the comeback victory with help from their backup goalie Kelly Campbell. The Mustangs wasted no time getting on the board in the first period as they found themselves up 1-0 just over two minutes into the game.  More details.

The York University Lions men’s hockey team was defeated by the University of Guelph Gryphons on Saturday night by a score of 5-2 in the regular-season finale for both squads.

The Lions, whose record dropped to 14-14-0 with the loss, already clinched a playoff berth with their big win over the nationally-ranked Western University Mustangs last week. They will finish in seventh place and will face the Windsor Lancers in the first round of the playoffs.

In the first period the Lions came out strong but Gryphons goalie Andrew Loverock stood tall to keep the game scoreless. The Lions thought they had opened the scoring in the early going, but a goal was disallowed due to a high sticking call. At the end of one period the game was tied at zero.  More details.

Earlier in the week, the Lions dropped a 4-2 decision to the University of Ontario Institute of Technology (UOIT) Ridgebacks on home ice. The Lions held a one-goal lead heading into the third period but the Ridgebacks scored three unanswered goals in the final eight minutes to complete the comeback.

The first period saw the Lions take a quick penalty, and the Ridgebacks wasted no time capitalizing as right winger Tony Rizzi tallied a power play goal just 51 seconds into the frame.

The Lions managed to get plenty of shots at the net from then on, and at 7:52 they would finally be rewarded when Mackenzie Micks netted a power play goal of his own to make it 1-1.  More details.

The York University Lions track and field team put forth an impressive effort at the Windsor Team Challenge this past weekend, recording 15 podium finishes at its last big meet before the Ontario University Athletics (OUA) championships.

Rookie sprinter Tameran Defreitas won two gold medals and a bronze to lead all Lions. She won the 60m in a time of 7.74 seconds, which represented a new personal-best mark in the event. She was also part of the gold-medal winning 4x400m relay and the bronze-medal winning 4x200m relay. Joining her atop the podium for the 4x200m relay were Mercy Bera, Sheereen Harris and Allison Gallaugher, while Harris, Kelsey Desjarlais and Ashley Skof were part of the 4x400m relay.

Thrower Cynthia Appiah led the way for the Lions in the field, earning the female athlete of the meet award after winning gold and silver medals in the shot put and weight throw, respectively. She finished first in the shot with a distance of 14.33 metres, her best mark of the season and 50 centimetres further than the second-place finisher. In the weight throw, her second-place result came on a throw of 17.82 metres, which was just seven centimetres behind the gold medallist.  More details.

York University Lions fencer Kayla Lambie won the silver medal in the individual sabre event at the OUA championships hosted by the Brock Badgers in St. Catharines, Ont., on Saturday.

Lambie, of Toronto, came up just short in her bid to defend the gold medal she won last season, but her silver-medal showing was still the best result of the weekend for the Lions. She was also named an OUA all-star for her efforts, marking the second straight season she has earned the honour.  More details.

The York University Lions men’s swimming team finished in ninth place at the OUA championships hosted by the University of Toronto this past weekend, while the women were 12th.

Philip Bogdanowicz and Matt Torres were the top Lions swimmers at the meet as each qualified for the B final in their respective events. Bogdanowicz accomplished the feat twice, finishing 12th in both the 50m breaststroke and the 100m breaststroke. Torres, meanwhile, had the top York finish at the event with an 11th-place showing in the 50m freestyle.  More details.