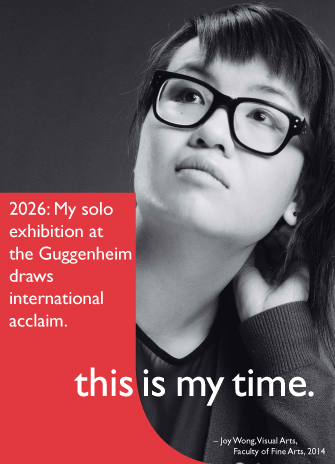 Look for the return of the imaginative and inspiring visions of 21 York U students that were captured in the fall release of the awareness campaign “this is my time”. The campaign, which raises the public’s awareness about the power and potential of a York U education, is going “back to market” as part of an effort to support future students as they make decisions about their postsecondary education.

“We’re heading into the time when high-school students are deciding on a university so this is the perfect time to have our students telling their stories of how a York University education will help them make a positive impact on the world.” says Susan Webb, executive director, Communications & Public Affairs Division.

To celebrate the campaign, York President & Vice-Chancellor Mamdouh Shoukri and Vice-President Academic & Provost Rhonda Lenton, held a special reception Jan. 28 to thank the students who provided the riveting visions, which have made the campaign so powerful and moving.

Starting today and continuing for six weeks, “this is my time” will appear in selected newspapers and on websites, digital mall posters and outdoor displays. As well, the cinema spot that was developed last year is returning to the big screen in selected theatres.

The very popular this is my time microsite is also returning. Future students will have an opportunity to try their hand at a quiz. They will be able to read profiles about the different York students featured in the campaign. As well, their professors and Faculty deans will talk about how a York University education can bring the campaign visions to reality. The site also offers the latest York U news about new developments on campus, research that is underway, and more.

The campaign leads up to the spring open house, which is one of the most important events for future students and a critical time for the University. During the open house, York University throws open its doors to showcase its accomplished professors, state-of-the-art facilities, research, libraries and academic support services.