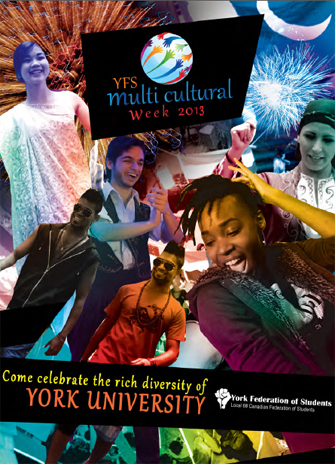 The York Federation of Students Multicultural Week will kick off Monday in the Student Centre Food Court with a smudging ceremony at 10am. The week is a chance for students, faculty and staff to celebrate their cultures and embrace the diversity of the York community.

The smudging ceremony is designed to cleanse bodies, minds and spirits and prepare participants for a positive and unifying week. Multicultural Week is organized by the York Federation of Students (YFS).

Following the opening ceremonies, there will be a Multicultural Week Parade, from 11am to noon, where dozens of clubs will march through campus proudly displaying their culture, traditional dress, music, art and political aspirations. Many of the clubs will wave flags, perform dances, play music or showcase other customs as they travel in a pulsating parade across campus. Clubs will be judged on the vibrancy of their appearances, their enthusiasm and overall spirit during the march.

A Culture Couture Fashion Show will display fashions and trends from around the world, from Dehli to Dakar, Cairo to Caracas, and Rangoon to Rio, from 1 to 4pm in the Student Centre.

The excitement continues on Tuesday, with the York Federation of Students Food Market from 11am to 2pm at the Underground Restaurant in the Student Centre. Various culinary cultures will be featured on the menu, including everything from bulgogi to baklava, tacos to tagine and paella to peri-peri to keep the taste buds hopping.

DJ Sound Clash will bring some of the globe’s best music to the Underground Restaurant from 2 to 5pm Tuesday, with timeless, traditional ballads and contemporary chart-toppers. DJs will battle it out, fusing old and new to create a cultural musical landscape in hopes of being named the champion of the day.

On Wednesday, a Global Tour will give students an opportunity to travel the world without leaving Keele campus. Pavilions with student clubs showcasing their culture, art, history and traditions will be on display in Vari Hall, Ross Link and Central Square. Later in the day, Speak Out Against Racism and Xenophobia, a safe space forum, will take place at 6pm at 313 Student Centre.

A Cultural Explosion Performance, a massive show by York clubs designed to highlight the unique artistic practices of diverse cultures, will take place Thursday, from 2 to 6pm, at the Rexall Centre.

The festivities will wrapup with the YFS Multicultural Week Formal, a celebration of campus and an official awards ceremony Friday, Feb. 8, starting at 7pm at the Venetian Banquet Hall. Tickets cost $35.